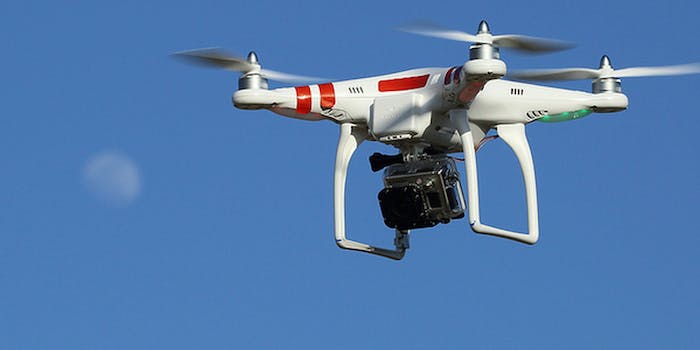 Smile, you're on drone-cam.

It goes without saying that we’ll never be able to get enough of staring at ourselves, as evidenced by the creation of a whole new variant of selfies.

At the Cannes Lions Festival, an annual event recognizing creativity in communications, the Twitter advertising team has gone to work capturing high-flying portraits of festival attendees with “dronies”—drone selfies.

“Our drones are creating two types of clips: dronies with a wide view of Cannes and ‘space drones,’ which zoom in from outer space,” a post on the Twitter advertising blog explains.

To create thse dronies, a camera is mounted to an unmanned flying aircraft—a drone—and starts with a close-up of a person or group of people before moving back to reveal the aesthetics of the surrounding area. Aside from the fact that Cannes is a scenic town along the Mediterranean Sea, the finished products are pretty impressive.

And with our first official #dronie from #CannesLions, a new bromance is born! cc @SirPatStew @joell https://t.co/ZL5PthcRkh

TechCrunch explains that the Twitter ad team is using dronies to show the importance of capturing live video at events. It’s also one way to show that drones aren’t just for killing people and freaking people out.

And here’s a space dronie:

Dronies were first popularized in April with a shot of Photojojo founder Amit Gupta and his friends, their dogs, and a bird’s eye view of San Francisco. While still a relatively new concept, Twitter’s involvement in the high-flying photography could catapult it further into the mainstream spotlight, opening the possibility of seeing more enthused people at events across the world.

The official Vine videos can be found on @dronie, which has already garnered over 3,500 followers. And as the festival continues, we can only hope to see more smiling, waving, and air kisses.

Photo by Don McCullough/Flickr (CC BY 2.0)