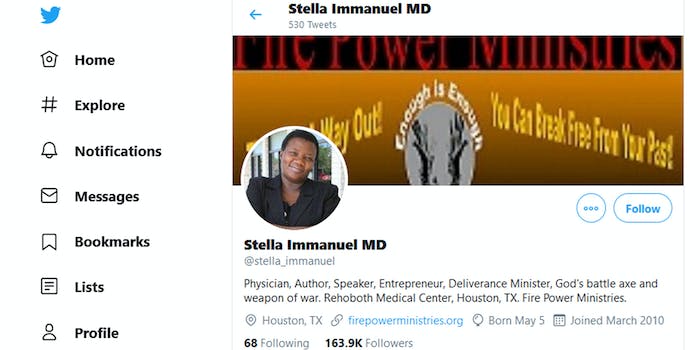 Dr. Stella Immmanuel, the doctor at the center of a viral video touting hydroxychloroquine, has had her Twitter account temporarily locked for violating the company’s coronavirus misinformation rules.

However, a tweet that shows the viral video was removed from her profile where she says “I will not be silenced.” Currently, her page has a message that says the tweet was removed for violating Twitter’s rules. That tweet is no longer available as a standalone tweet.

Another video that was pinned to the top of her profile with the hashtag “#HCQWorks” was also removed.

Immanuel was prominent in a video where she dismissed wearing a mask and called studies debunking hydroxychloroquine “fake science.”

The video was shared by a number of people including President Donald Trump and Donald Trump Jr. The president’s son was temporarily locked out of his account after sharing the video.

Following the video, Trump said she “thought her voice was an important voice.”

Studies have shown that hydroxychloroquine does not have a benefit in treating coronavirus. Trump has long touted the drug, even saying he took it as a preventive measure for the virus.

Following the video, it was reported by the Daily Beast that Immanuel believed in a number of bizarre medial practices including alien DNA and sexual encounters with demons, which led demon sperm to trend on Twitter.