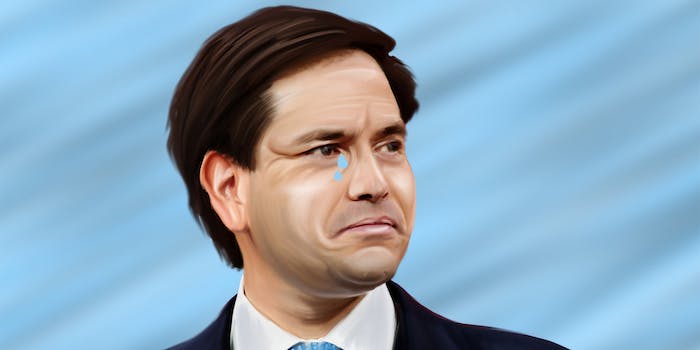 Politiwoops in the U.S. was cut off in June. But it went dark over the weekend in Europe along with its international, diplomatic version Diplotwoops. It had been active in 30 other countries and was suspended by Twitter when it nipped access to the company’s API.

Sunlight Foundation’s spokesperson Jenn Topper told the Daily Dot she believed Twitter’s rationalization was that the sites violated Section 3 of Twitter’s Developers Agreement and Policy to “Delete Content that Twitter reports as deleted or expired.”

The Open State Foundation continued to run the non-use sites after Sunlight was shut down, surfacing the deleted tweets of elected members of national parliaments from France to Algeria as well as representatives to the European Parliament and the Vatican and their diplomats.

Open State noted that the work on these sites has “been extensively used and cited by journalists around the world.”

In a note to Open State by Twitter, the company explained its rationale. “Imagine how nerve-racking – terrifying, even – tweeting would be if it was immutable and irrevocable? No one user is more deserving of that ability than another. Indeed, deleting a tweet is an expression of the user’s voice.”

In his “Eulogy for Politwoops,” Sunlight President Christopher Gates explained what differentiates political speech from private and lamented that Twitter’s decision was “a reminder of how the Internet isn’t truly a public square. Our shared conversations are increasingly taking place in privately owned and managed walled gardens, which means that the politics that occur in such conversations are subject to private rules.”

Arjan El Fassed the director of the Open State Foundation responded to Twitter’s latest decision by saying, “What politicians say in public should be available to anyone. This is not about typos but it is a unique insight on how messages from elected politicians can change without notice.”

“A member of Congress does not and should not have the same expectation of privacy as a private citizen,” said Gates. “Power can only be accountable with a generous application of transparency.”

However well-reasoned Twitter’s actions may be, there will undeniably be less of that transparency now.