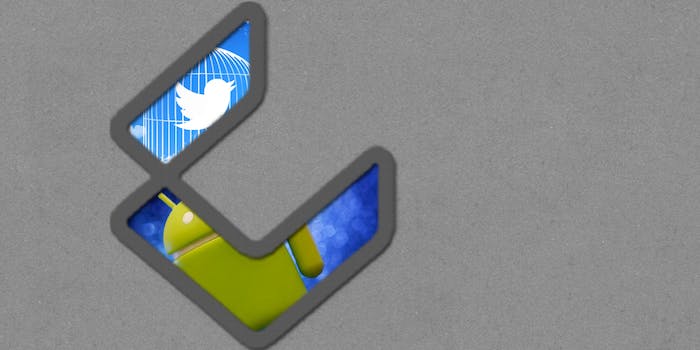 Twitter has purchased Cover, a startup Android app that lets users customize their home and lock screens, for an undisclosed sum.

Cover announced the acquisition on its blog. “Twitter, like Cover, believes in the incredible potential of Android. They share our vision that smartphones can be a lot smarter—more useful and more contextual—and together we’re going to make that happen. We’ll be building upon a lot of what makes Cover great, and we’re thrilled to create something even better at Twitter,” wrote the startup’s creators. Which is enthusiastic, but vague. “We don’t have specific plans to share at this time. Stay tuned!” a Twitter spokesperson told the Daily Dot. So both parties are playing details close to the chest.

Cover launched just last October, and while it will remain in the Play store until further notice, it appears the team has moved into Twitter headquarters and will no longer focus on Cover as an independent product. That’s a shame for Cover fans who aren’t also Twitter fans, because it’s an impressive standalone app. And there are plenty of Cover fans; the young app already has hundreds of thousands of users. It monitors when and how users opened their Android apps and creates custom lock screens that could pull up the apps users were most likely to need, when they needed them. So if you tend to use Maps when driving, Cover can tell when you got on the road and make it the most readily available app. It’s very clever, but it’s also not very clear what Twitter will do with this on a project basis. It may be more of a talent hire than a tech hire.

What we do know: This is definitely a move to shore up Android-focused talent. Mobile is more important for Twitter than desktop, and Cover’s team could help Twitter develop tools that make tweeting from Android better than ever. What could those be? Even though Twitter’s recent foray into picture-tagging ripped a page from Facebook’s playbook, it’s unlikely the company will imitate Facebook’s attempt at an Android-based homescreen like Home, since Home was a dud. It’s hard to tell what the Cover team will do, but it’s clear Twitter has confidence that they’ll add something of value to the social network’s Android strategy.