Twitter has angered the alt-right movement after suspending 7 accounts

One of the account holders called it 'corporate Stalinism.'

Less than a day after rolling out new anti-harassment features, Twitter suspended several accounts associated with the alt-right movement.

According to USA Today, Twitter suspended the verified account of alt-right leader Richard B. Spencer, the accounts of Paul Town, Pax Dickinson, Ricky Vaughn, John Rivers, and the accounts of Spencer’s think tank and online magazine.

As defined by the Southern Poverty Law Center, the white nationalist alt-right movement is, “a loose set of far-right ideologies at the core of which is a belief that ‘white identity’ is under attack through policies prioritizing multiculturalism, political correctness and social justice and must be preserved, usually through white-identified online communities and physical ethno-states.” 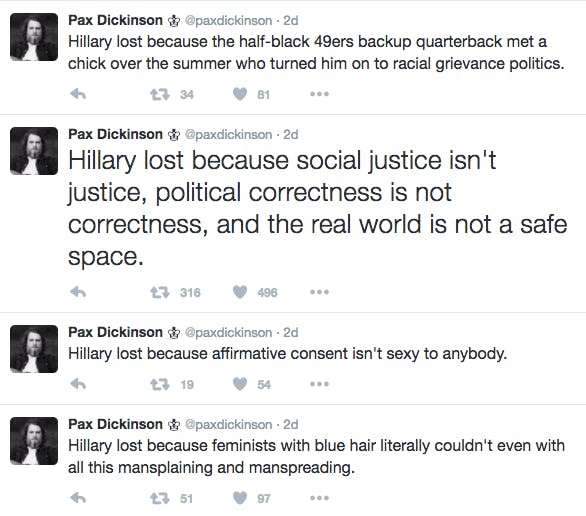 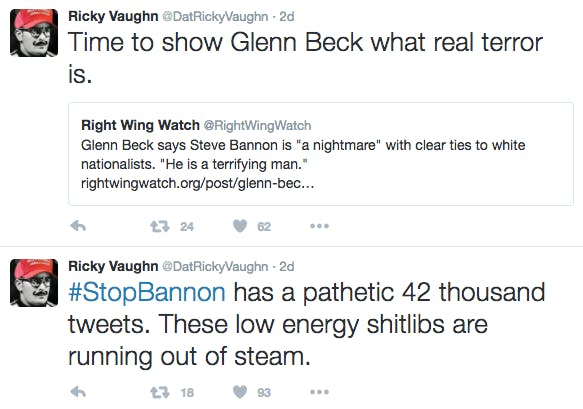 Many Twitter users associated with the alt-right responded to the suspensions in the hours following.

Based on a hate groups' pressure (SPLC), Twitter is censoring people strictly based on political ideas. Let that sink in. @realDonaldTrump

After having his three accounts suspended, Spencer posted a YouTube video of himself calling the series of suspensions “execution squads across the alt-right.”  Spencer titled his video “The Knight of the Long Knives,” an allusion to Adolf Hitler’s purge of Nazi leaders in 1934 to retain power.

“It is corporate Stalinism, in the sense that there is a great purge going on, and they’re purging people on the basis of their views,” Spencer said.

Twitter’s hateful conduct policy prohibits attacking, threatening, or promoting violence against people on the basis of “race, ethnicity, national origin, sexual orientation, gender, gender identity, religious affiliation, age, disability, or disease. We also do not allow accounts whose primary purpose is inciting harm towards others on the basis of these categories.”

On Tuesday, Nov. 15, Twitter announced updated to their measures taken toward online harassment, including an improved “mute” feature and support team retraining.

Twitter’s announcement and subsequent “purge” comes on the heels of years of criticism that the company has not effectively addressed harassment and hate speech sent through the platform, with many women and people of color facing an onslaught of harassment, including rape threats and death threats to their children.

Southern Poverty Law Center spokeswoman Heidi Beirich told USA Today that the center asked Twitter to remove more than 100 accounts of white supremacists who have violated the company’s terms of service but as of Monday, Twitter had done nothing.