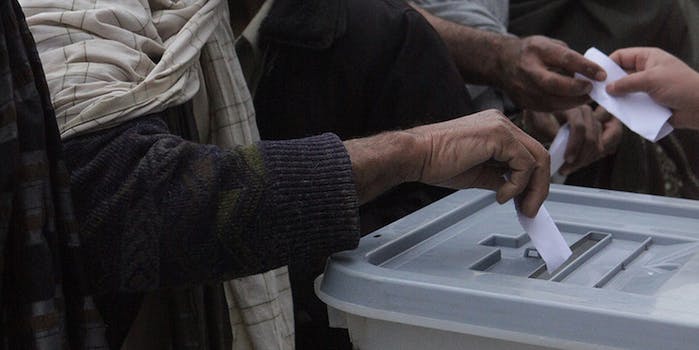 Mohammad Amanullah's murder was the first of an election official since nominations for April's presidential election opened Monday.

The Taliban killed a senior Afghan election official and bragged about it on Twitter Wednesday, ahead of presidential elections.

Assassins on motorbikes gunned down Amanullah Amanullah, the head of the Independent Election Commission (IEC) in the northern Kunduz province, outside his home. Within an hour of Amanullah’s death, the Taliban took responsibility in a tweet.

“At 9 a.m. this morning, Engineer Mohammad Aman head of Kunduz Independent Election Commission was killed by our Mujahedeen in Takharistan area of Kunduz city,” reads an Australian Associated Press translation.

It is apparently the first time the Taliban, which was in power in Afghanistan from 1995 to 2001,

used Twitter to claim responsibility for an assassination, according to the New York Times.

“The Taliban commit such acts to prevent our people from becoming empowered and developed, so that the foreigners can determine our destiny,” said President Hamid Karzai in a statement.

A Kunduz deputy police chief said the force has made five arrests in the case.

Amanullah’s murder was the first of an election official since nominations for April’s election—which takes place as 87,000 NATO (North Atlantic Treaty Organization) soldiers prepare to withdraw from Afghanistan by the end of 2014—opened Monday. No candidates have declared themselves for the race ahead of the Oct. 6 nomination deadline.

Amanullah’s murder heightened fears the election will lead to an increase in violence.

“We did not say we’ll attack it, but the commanders on the ground will,” one member of the fundamentalist Taliban, which plans to boycott the election, said recently.