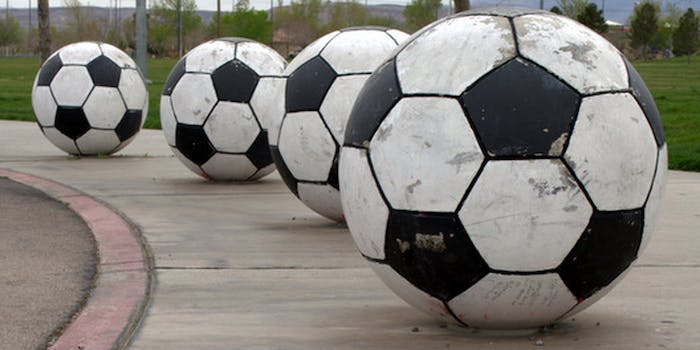 Twitter is already auctioning ad space for the 2014 World Cup

It's Twitter's biggest event, reaching 47 million people in 50 countries, and advertisers will have to pay dearly to be part of it.

When the likes of Lionel Messi and Neymar are tearing up the turf in Brazil to win one of soccer’s biggest prizes, Twitter’s top advertising spots will long have been decided.

The 2014 FIFA World Cup is still 11 months away, but Twitter is planning ahead. Later this month, Twitter will be holding its first auction for advertising packages for a major event ahead of time, Ad Age reports. The company will be selling promoted trends to the highest bidder.

Promoted trends are purchased for an entire market for a full day, though promoted tweets and accounts are typically bought through auction and targeted to certain demographics. Snapping up a promoted trend in the U.S. typically sets companies back $200,000.

The World Cup packages are going to be broader, according to the sales information Ad Age saw. Whoever wins the auction will be able to take over promoted trends in 50 countries for a day at an estimated value of $600,000.

“With over 200M users, and 47M football fans, we are aware that competition for Twitter Promoted Trend dates is likely to be intense,” Twitter said in its sales deck.

The gold ad package (there’s one silver and two bronze ad packages) includes promoted trends for six days, including on the final and a semi-final. The auction reserve price is $3.06 million according to the report. The winner of the auctions will pay $1 more than the second-highest bid.

It’s a smart move on Twitter’s part. Sports and other live events often bring a spike in the number of tweets and people checking Twitter, so the World Cup is a prime opportunity for the company to cash in on marketers looking to increase awareness of a brand. Marketers are already planning ad campaigns for the World Cup and it’s wise for Twitter to get in on the action before brands commit all their budgets on ads elsewhere.