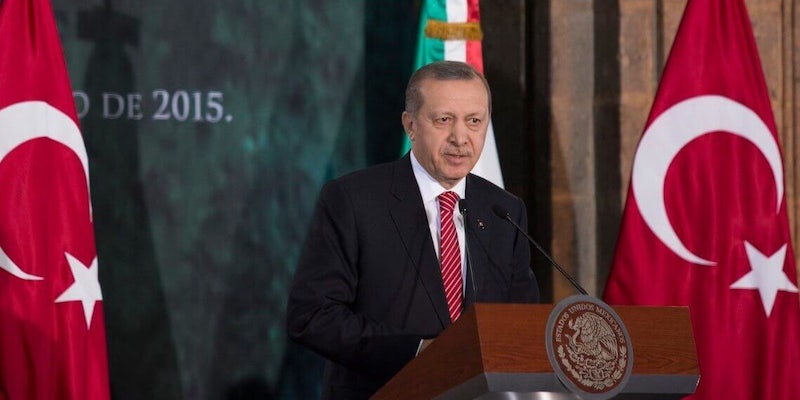 The latest front in Turkey’s digital war against the Kurds? Google reviews

Will one-star reviews win a war?

As the fighting continues between Turkey and Kurdish forces in Northern Syria, a propaganda war is being waged online.

Each has accused the other of lying to the public to gain support, but, much like their militaries—the Turkish Armed Forces is the second-largest standing army in NATO; the Kurdish People’s Defense Unit (SDF) and Kurdistan Workers’ Party (PKK) are comparatively tiny and poorly equipped—Turkey’s efforts appear to be far more extensive and sophisticated.

The next PKK front is to insist that it can propogate its terrorism on Facebook. I don’t agree with Turkey’s clampdowns on Wikipedia etc, but Facebook will need to exercise caution on PKK agitprop. The next phase of this war is digital – and both sides are about to go hard https://t.co/exajhvqXb3

A friend of mine who works for Accenture(a company based in Dublin working for Facebook as Community Operations Analysts)just called me and said that they have received instructions from Facebook(based on Turkey's request)to remove all posts in support of the SDF.
This is serous

The Turkish press is also assisting in the propaganda effort. Reporting by media in Turkey, where freedom of the press is among the worst in the world according to Reporters Without Borders, consistently characterizes “Operation Peace Spring” as necessary and just.

Anadolu Agency, a state-run international news agency in Turkey, is running stories that include “Turkish drones hit YPG/PKK with pinpoint accuracy,” “Syrian National Army soldiers reunite with families,” and the like. It also published a “social media fact check” that purports to expose Kurdish propaganda about the conflict.

As of late Monday morning, headlines on the home page of TRT World, a Turkish state media outlet that broadcasts and publishes in English, include “Operation Peace Spring: Can Turkey secure its borders and create a safe passage for Syrian refugees to return?” “The propaganda war against Turkey is doomed to fail,” “Western criticism of Turkey’s Syria operation is a joke,” “Is the Syrian mess Obama’s legacy?” and a story repeating Trump’s claim—deemed “sheer insanity” by Vivian Bercovici, Canada’s former ambassador to Israel —that the Kurds are deliberately releasing ISIS prisoners to try and convince the U.S. to intervene.

The New York Times reports that ISIS prisoners held by the Kurds actually took advantage of the mayhem caused by the fighting to escape. Foreign Policy’s Pentagon correspondent Lara Seligman claims that a senior U.S. official has said that Turkish-backed forces are releasing the prisoners and blaming the Kurds.

WOW! Second Raqqa scandal from PKK/YPG terrorists. Turkish Army is storming the prison in Tal Abyad, where ISIS/DEASH prisoners supposed to be in, to get them under control, Seeing every single of them were released by PKK/YPG just as they did in Raqqa. pic.twitter.com/goTR0bnkcI

Turkish President Recep Tayyip Erdoğan and his proxies are using Twitter to control the narrative about the offensive. Erdoğan has tweeted about it in English, Turkish and Arabic. He calls the fighting a “peace process” to “eliminate the threat of terrorism directed at our country” and claims that Turkey intends to preserve Syria’s territory.

#OperationPeaceSpring will neutralize terror threats against Turkey and lead to the establishment of a safe zone, facilitating the return of Syrian refugees to their homes.

We will preserve Syria’s territorial integrity and liberate local communities from terrorists.

Turkey and its sympathizers are leaning heavily on hashtags to promote the invasion that has displaced tens of thousands of people. According to Slick Rock Web CEO Eric JN Ellason, from Oct. 6-9, there were nearly 53,000 tweets containing the pro-Turkey hashtags #OperationPeaceSpring, #KurdsSideWithTurkey, #BarisPinari.

Of these, he says, only 36 mention ISIS and most of those state falsely that ISIS and SDF/PKK are one and the same. (YPG is an offshoot of PKK.)

52922 tweets were collected Oct 6 – 9th using various pro-Turkish military propaganda hashtags (#OperationPeaceSpring, #KurdsSideWithTurkey, #BarisPinari ) for the Northern Syria invasion. Only 36 even mention ISIS and most of these just say "ISIS, PKK, YPG are all the same" pic.twitter.com/6FzRINloIe

Despite the hashtag #KurdsSideWithTurkey being in English, it's being tweeted almost exclusively by accounts that usually tweet in Turkish. They're also fond of retweeting Erdogan's official account (as well as each other.) pic.twitter.com/1CUQnwQNc7

Elsewhere, on Wikipedia, people sympathetic to Turkey have edited PKK’s page several times in recent days, using unreliable sources or misstating facts to label it a terrorist group. (Several nations, including Turkey and the U.S., have designated it as such; however, many nations, as well as the U.N. and NATO, have not.) The conflict has led to other clashes between Wikipedia editors; an editor for the newly-created Operation Peace Spring page warns, “This name edit war needs to stop, adding some comments regarding names.”

But perhaps the most interesting and lo-fi front of the propaganda war is found on Google reviews. Businesses in the YPG/PKK-controlled region appear to have been receiving a disproportionately large number of one-star reviews from Turkish people.

One single reviewer, who writes the vast majority of their reviews in Turkish, has given dozens of businesses, churches, and public facilities in Northern Syria one-star reviews in recent weeks, including six one-star reviews last week. A mosque is the only place in Syria to get more than one star from the reviewer. Conversely, they’ve given places in Turkey a range of ratings, primarily three or four stars.

Another reviewer has labeled a park in Syria “terrorism place.”

writing google reviews to own the SDF pic.twitter.com/zmbhSKL4J5

As long as fighting continues on the ground, and perhaps long after, the war to control the “truth” is likely to persist online.