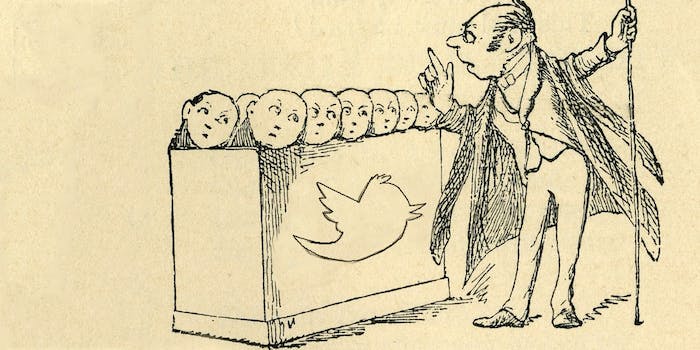 Some of the tweets are shockingly innocuous.

On Monday, 29 Turks will begin their trial for one of the country’s newfound sins: upsetting the state with tweets.

The trial is not, however, directly tied the Prime Minister Recep Erdo?an’s recent, and fairly ineffectual, Twitter ban, which was formally lifted April 3. Rather, it stems from last June’s massive protests, which appear to have sparked Erdo?an’s Twitter ire.

That’s when Turkey managed to arrest 29 people for tweets related to organizing those protests—officially, spreading “propaganda” or “misleading information.” According to Amnesty International, at least some of those tweets were shockingly innocuous, and did nothing more than literally tell people where the protest was. Like this one, which Amnesty says is specifically cited in a case sheet against its poster:

Translated, it means “We are resisting under the rain, come on Izmir to Gundogdu #resistizmir #resistgezipark #geziparkinizmir.” It was retweeted fewer than 100 times, and @ozquner barely has 200 followers.

The accused tweeters range from ages 19 to 36, are mostly students, and face up to three years in prison.

“It is truly bizarre that 29 individuals should be brought to a court to defend their few handpicked tweets,” Amnesty Turkey researcher Andrew Gardner wrote in his analysis. “None of the tweets contain incitement to or evidence of participation in violence’ or anything else that could be called criminal. They are simply sharing information and opinions.”