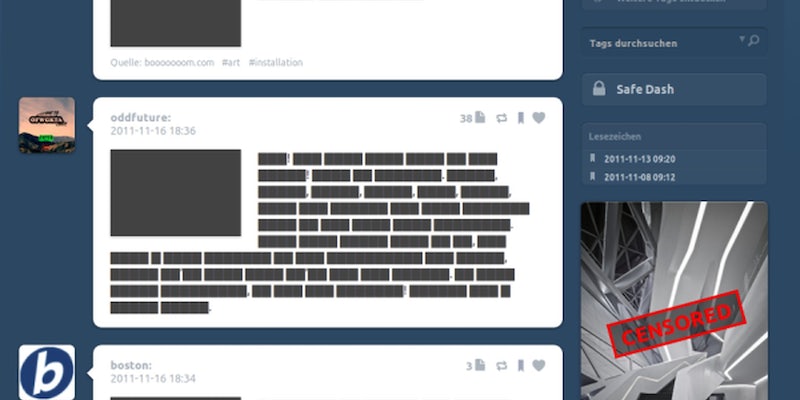 The censorship on Tumblr today effectively alerts users to the potential consequences of the Stop Online Piracy Act.

Don’t blame the TumblBeasts if you can’t see your Tumblr dashboard. Today, 33 million users saw nothing but censored text and images on the image-sharing platform.

It’s a dramatic statement by Tumblr’s corporate office against the Stop Online Piracy Act. The implication is that the act has the potential to censor all of Tumblr’s content—for real.

Tumblr users can make the censored bars go away by scrolling to the next page, but this will trigger a link on top of the dashboard to Protect the Net. Here, the Tumblr staff gives users talking points before connecting them on the phone with their representatives. Thus far, it’s working.

Once they figured out how to remove the censor bars from Tumblr, the platform’s impressive stunt occupied much of the users’ conversations. You can follow the most recent reactions with the Tumblr tags censor and censorship.

“Tumblr, you made me think my computer was broken,” wrote user idontcarewhy.

Some users were angry at Tumblr’s extreme tactics. Others, like user hello-mylove, thought Tumblr was overdoing it.

“I just called my congressman Don Young and got a woman in his office… She said that this is an exaggeration and that there’s nothing to be concerned with,” she wrote.

Most users, however, stood with Tumblr on the issue. The Tumblr staff-post on censorship was reblogged 2,396 times, at last check.

“Thank you tumblr for making me imagine what it would be like if my favorite sites on the internet were censored,” wrote user caitycatxo.