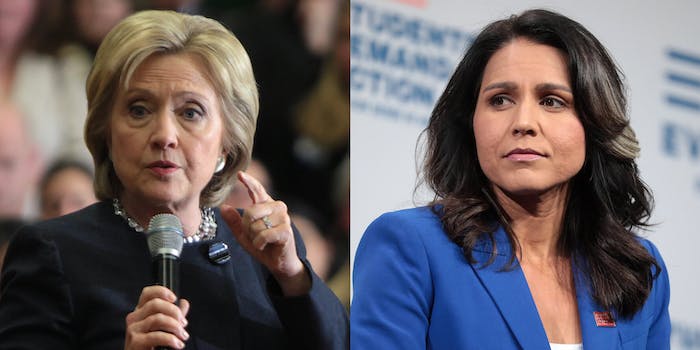 Gabbard's lawyers joined the war of words between the 2020 hopeful and Clinton.

Lawyers for 2020 Democratic presidential hopeful Rep. Tulsi Gabbard (D-Hawaii) have called on Hillary Clinton to retract comments she made last month where she appeared to claim that Russia favored her in the 2020 election.

Clinton, without mentioning Gabbard by name, made the remarks on a podcast with David Plouffe. During the conversation, she said that “somebody who is currently in the Democratic primary” was “the favorite of the Russians,” adding that the country had “a bunch of sites and bots and other ways of supporting her so far.”

A spokesperson for Clinton later said that remarks she made about “they” wanting Gabbard to run a third-party campaign in 2020 was referring to Republicans, not Russia.

However, when first asked about Clinton’s comments, Nick Merrill joked, “if the [Russian] nesting doll fits.”

Following the remarks being made public, Gabbard pushed back at Clinton on Twitter, calling her the “queen of warmongers” and the “embodiment of corruption.”

Gabbard’s lawyers on Monday called the statements “defamatory,” according to reports.

Rep. Tulsi Gabbard’s legal counsel has released a letter addressed to Sec. Clinton calling on Clinton to apologize for the Russian asset comments she made weeks ago. The letter reads, “Your statement is defamatory, and we demand that you retract it immediately.” pic.twitter.com/18aykMtjCb

The letter demands that Clinton hold a press conference to retract her remarks, post it on her Twitter account, and distribute it to major news outlets, according to Vice News.