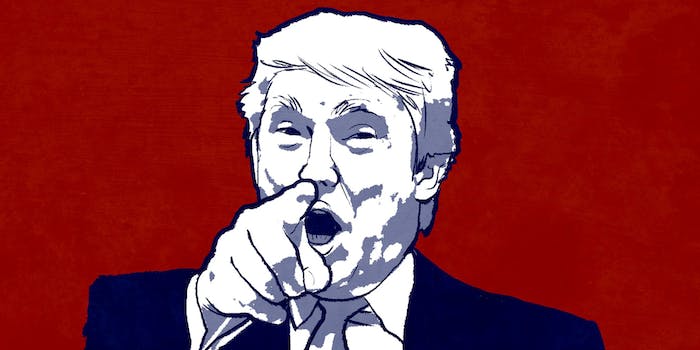 Trump's plan B if he doesn't win the presidency has problems of its own.

While Donald Trump hasn’t confirmed if he’ll launch Trump TV in the event of a loss on Nov. 8, the Republican presidential candidate can’t be happy to find out that someone beat him to buying up the domain—especially since the owner of Trump.tv is no fan of the Republican nominee.

If you visit Trump.tv, it redirects to Trump.org, a site that makes its anti-Trump leanings clear.

Chris Puchowicz has been the owner of Trump.org and Trump.tv since he bought them at public auctions for expired domains back in 2012 and 2013, respectively. Puchowicz, a 36-year-old who works in finance for a large corporation, snatched up the domains in response to buzz about a prospective Trump presidential run, he told the Daily Dot in an email.

Trump’s lawyers overnighted Puchowicz a cease-and-desist letter after he bought Trump.org in August 2012. Trump’s legal team accused Puchowicz of  “willful trademark infringement and cyber piracy” and gave him eight days to transfer the domain to Trump or face legal action.

But threats by Trump’s legal team turned out to be empty. Puchowicz wasn’t planning on using Trump.org for commercial use and specified upfront that the site wasn’t associated with Donald Trump in any way.

The legal threats “were baseless, as I was not using the domain for any commercial use; it was used as a personal commentary against Donald Trump,” said Puchowicz in an email to the Daily Dot. After his own attorney sent Trump’s lawyer a letter, Puchowicz didn’t hear anything back from Trump’s end.

Puchowicz ended up turning Trump.org into a gripe site warning people against voting for the real estate tycoon in case he ever ran for public office. For the past four years, Trump.org has warned voters not to consider a President Trump. Long before the 2016 election news cycle began digging into Trump’s past, Puchowicz laid out Trump’s flip-flops on same-sex marriage, abortion, gun control, and tax cuts on a single, sparse, black-and-white web page.

Referencing an interview where Trump makes a comparison between golf and gay marriage (in which Trump said, “I have so many fabulous friends who happen to be gay, but I am a traditionalist”), Puchowicz wrote the following in 2012:

“First of all, what is he talking about? Someone who wants to potentially be the President of the United States needs to be able to communicate clearly so that the American public can understand his full intent. Secondly, and more importantly, the United States has come a long way in terms of acceptance of people. Acceptance of people who look different from yourself, act different from yourself, believe different things from yourself, have different lifestyle choices from yourself. For someone who is considering a Presidential run to state that he is against gay marriage because he is a traditionalist is more than scary. What other “traditional” beliefs would Trump have that as a political figure would have real consequences?”

Eric Trump, the candidate’s son, told Business Insider in 2015 that the Trump Organization owns tens of thousands of domain names linked to his father’s name and his properties. Domain finder WhoIs reveals that both DonaldTrumpSucks.com and DonaldTrumpNetworksSucks.com are registered to the Trump Organization’s general counsel’s email address. So is TrumpBeddingOnline.com and TrumpHomeCandles.com, among others.

But Trump.org may have been too obvious of a choice.

“I find it funny that Trump and his employees didn’t have the common sense to participate in the public auction, but days after they tried to bully me so they could get the domain for free after I paid for it,” Puchowicz said. “Lack of common sense and bullying/scare tactics. Pretty much sums his campaign up as well. Goes to show they are not proactive, only reactive.”

After purchasing Trump.tv in 2013 for a paltry sum of $251 dollars, Puchowicz told the Daily Dot, he hasn’t heard a word about it from the Trump’s legal team.

It may be evidence that Trump TV isn’t actually in the works as rumored—or someone just dropped the ball.