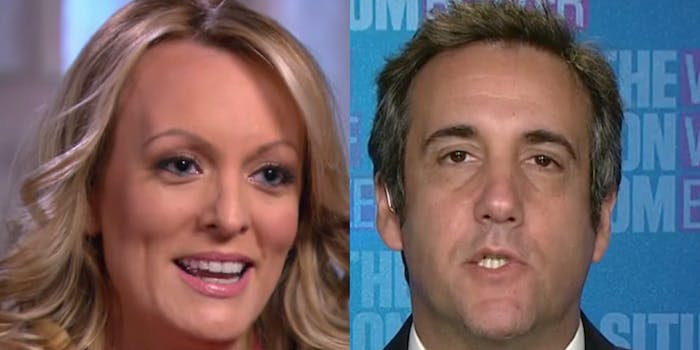 He said it's due to the ongoing federal investigation.

President Donald Trump’s longtime personal lawyer, Michael Cohen, said he will invoke his Fifth Amendment right against self-incrimination in a lawsuit filed against him by Stormy Daniels, the Hill reported Wednesday.

“Based on the advice of counsel, I will assert my 5th amendment rights in connection with all proceeding in this case due to the ongoing criminal investigation by the FBI and U.S. Attorney for the Southern District of New York,” Cohen said in a court filing.

He cited an ongoing federal investigation as his reason for the plea. The FBI raided Cohen’s home, office, and hotel room on April 9, taking documents related to Daniels and other matters. He is reportedly being investigated for possible bank fraud and campaign finance violations.

Daniels, an adult film star whose real name is Stephanie Clifford, is suing Cohen for defamation for saying Daniels lied about an alleged affair with Trump. Cohen paid the actress $130,000 in hush money that he claims came out of his own pocket ahead of the 2016 presidential election.

Daniels sued Trump over the deal, saying it’s void because he never signed it, and she later rolled in the defamation charges against Cohen.

“Never before in our nation’s history has the attorney for the sitting President invoked the 5th Amend in connection with issues surrounding the President,” Avenatti wrote. “It is esp. stunning seeing as MC served as the ‘fixer’ for Mr. Trump for over 10 yrs.”

This is a stunning development. Never before in our nation’s history has the attorney for the sitting President invoked the 5th Amend in connection with issues surrounding the President. It is esp. stunning seeing as MC served as the “fixer” for Mr. Trump for over 10 yrs. #basta

It will be up to the judge to determine whether there’s enough overlap between the civil suit with Daniels and the federal investigation, according to CNN.
The “conundrum,” the judge said, is that “the scope and breadth of the criminal investigation remain a mystery.”