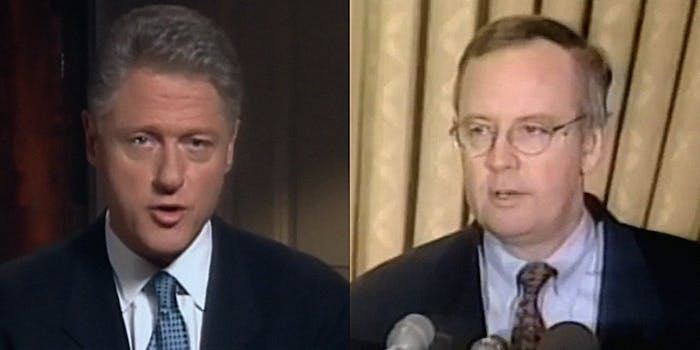 The playbook is extremely familiar.

At this very moment, there’s a sizable chance that somewhere in the White House, President Donald Trump is seething about special counsel Robert Mueller’s investigation.

The president is growing increasingly angry that his aides aren’t doing his bidding, which is a sentiment that we’ve seen for months. He was furious at Attorney General Jeff Sessions for recusing himself from the Russia probe and wondered why he couldn’t get “his guys” at the Justice Department to do his bidding. This anger was highlighted again in a recent Vanity Fair article, when Trump reportedly longed for a “killer,”referencing former Trump-whisperers Corey Lewandowski and Jason Miller.

As the president struggles to right a keeling presidency, Mueller’s men are latching their tentacles onto every lead presented to them. And though Trump’s surrogates have tried to smear the special counsel, they haven’t been too successful. Most polls show Mueller’s approval ratings to be equal or higher to those of the commander-in-chief.

Trump is dismissive of those other than him, but perhaps he could learn a thing or two from former President Clinton.

Because this hardly the first time that 1600 Penn has found itself under the eye of an independent counsel. Only two decades ago, Bill Clinton’s White House was boiling with a scandal that crept into the Oval Office thanks to real estate deals and presidential infidelity. The 42nd president had a politically-savvy team of operators who managed to take on independent counsel Ken Starr and if they didn’t win, they certainly scored a draw. While Clinton will probably be remembered for the Lewinsky scandal, the actions of him and his team kept him from being removed from office.

After Starr was appointed, the Clinton machine went to work on Starr, Hillary Clinton later branded the investigation as a “vast right-wing conspiracy”—a term put together by Chris Lehane and Mark Fabiani, political operatives brought into the White House to help deal with the Starr investigation.

Fabiani has been hired to fight for the public image of everybody from Bill O’Reilly to the San Diego Chargers to Rick Perry. Lehane is currently at war for Airbnb. Lehane and Fabiani were “killers” of the highest class. Instead of playing defense, Fabiani recalled to SFGate that his tactic was to find out when Clinton would be attacked and offer “prebuttals.” He kept cozy relationships with reporters and leveraged those relationships when necessary.

Trump has put together a war room of his own, but doesn’t have that kind of goodwill with the press. His most loyal attack dog is Michael Cohen, but he and the rest of Trump’s men—attorneys Ty Cobb and John Dowd have stumbled: Cohen was recently forced into admitting that he paid Daniels $130,000 and Cobb has been forced to play defense for his boss’ rash statements especially when it comes to possible conversations with Robert Mueller.

And former Trump aides’ arguments, like Seb Gorka’s, get relegated to Fox News and Twitter where they aren’t widely seen.

Both White Houses have set out to put a beating on the special counsel. During the Clinton years, an unnamed White House official told the New York Times that the attacks, partially directed by Fabiani and Lehane, were “part of our continuing campaign to destroy Ken Starr.”

Outside the gates of Pennsylvania Avenue, the Clinton White House’s surrogates donned battle apparel. Clinton ally James Carville famously kicked off the festivities by remarking, “there’s going to be a war.” Clinton-whisperer Dick Morris told the Weekly Standard that the goal of the smear was to “take Starr off the pedestal as a prosecutor and make him a partisan adversary, change him from a special prosecutor into a Republican U.S. senator.”

Every time Starr made a misstep, the Clinton “killers” pounced. Morris (who was not in the White House during the Starr investigation) speculated that the West Wing was “baiting” the investigator, explaining “it creates the tit-for-tat which brings him down to the level of a partisan and away from the level of an impartial investigative counsel.”

And it worked. The independent counsel’s poll numbers plummeted; a Starr aide put it bluntly to the Times, lamenting, “we’re getting creamed.”

Trump’s men in the right-wing media have made some of the same moves. Sean Hannity and Tucker Carlson spend their programs condemning Mueller as an out-of-control dog catcher. Trump even talks to Hannity on a regular basis, according to a Daily Beast report. But the polls indicate that the constant attacks don’t seem to be doing much for the general public’s opinion of Mueller. Instead, they’re resonating deeply with the Trump-supporting Fox audience who has hated Mueller from the beginning.

When the Starr report finally came out, Clinton further loosed the hounds. His team, which included Lehane, Fabiani and a gang of attorneys worked overnight preparing their rebuttal to the report. It was a singeing document, at one point reading. “after impaneling grand juries and leasing office space in three jurisdictions, and investigating virtually every aspect of the president’s business, financial, political, official and, ultimately, personal life, the independent counsel has presented the House with a referral that no prosecutor would present to any jury.”

This memo totally vindicates “Trump” in probe. But the Russian Witch Hunt goes on and on. Their was no Collusion and there was no Obstruction (the word now used because, after one year of looking endlessly and finding NOTHING, collusion is dead). This is an American disgrace!

But partisan politics won out, as it almost certainly will under Trump. The Republicans under Clinton were eager to impeach him, even if it was only a formality. Though the Clinton “killers” had damaged the public’s opinion of Starr’s investigation, it wasn’t enough to dissuade Gingrich from putting impeachment proceedings to the floor. The White House then played the diplomacy card, whipping Democrats to keep the impeachment at arm’s length.

Unlike Trump, Clinton worked to keep his party on his side. And that loyalty was the only thing that saved him from being tossed out onto Pennsylvania Avenue. During the impeachment proceedings, one Democratic congressman declared “my constituents don’t hate Bill Clinton. They love him and pray for him at this moment—the bullies get theirs, and you’re going to get yours too!”

It’s easy to imagine those words bellowed by a Trump loyalist like Rep. Devin Nunes (R-Cali.) but if a Mueller report suggested impeachment proceedings and that landed on the floor, there’s a decent chance that other Republican lawmakers, who have been attacked by the president, would cross the aisle.

It might be a little late for Trump to find the squadron of “killers” that he’s craving. But he’s looking to keep possible impeachment proceedings from hitting him hard, he might want to take a line out of the Clinton playbook and draw his party to his side. He may need them soon.