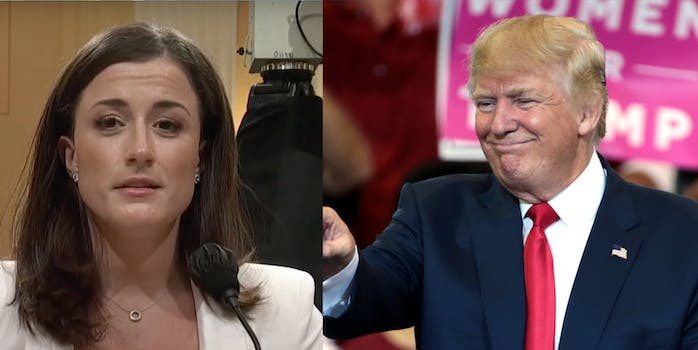 ‘King’: Trump fans cheer on testimony he tried to attack Secret Service to get to Capitol on Jan. 6

It comes even as Trump denies it on Truth Social.

On Tuesday, the congressional committee investigating the Capitol riot presented arguably its most damning evidence to date. Cassidy Hutchinson testified to what she witnessed related to the violent effort to overturn the 2020 election in favor of former President Donald Trump.

People in Trump’s orbit, and Trump himself, are freaking out.

According to Hutchinson, White House staffers were aware that they risked criminal prosecution if they heeded Trump’s demands. She said that White House Counsel Pat Cipollone told her the morning of the riot “we’re going to get charged with every crime imaginable” if they facilitated Trump marching to the Capitol.

She also said that as he was driven from the protest, an enraged Trump tried to grab the wheel of the presidential limousine in an effort to go to the Capitol. She said he simultaneously used his free hand to grab for the throat of a Secret Service agent.

Hutchinson said Trump has a history of violent outbursts. She said that the day then-Attorney General William Barr told reporters that there was no evidence of widespread voter fraud, he threw his lunch across the Oval Office.

Hutchinson’s testimony went off like a bomb in Trumpworld.

Trump himself went on a spree of posting on his social media platform during the hearing. He used the familiar barbs, exclamation points, and all-caps missives in an effort to throw everything at the wall to see what stuck.

“I NEVER SAID, ‘MIKE PENCE DESERVES IT’ (to be hung),” he wrote, along with some characteristic insults directed at Hutchinson.

Simultaneously, Trump’s hardcore supporters were divided by Hutchinson’s testimony. Some reacted to her claims with wholehearted approval.

“Finally got our answer. All of us who thought Trump abandoned everybody at the Capitol, he literally fought with the Secret Service to try to see us,” one wrote. “King.”

White nationalist Nick Fuentes created a widely-circulated meme of Trump pointing a gun out the window of a limousine. The meme celebrated the claim that Trump grabbed a Secret Service agent and the wheel of the presidential vehicle, according to Hutchinson.

The far-right, conspiracy-laden Gateway Pundit attempted to run interference for Trump by publishing an article headlined, “J6 Committee’s ‘surprise’ witness was so disgusted by Trump and Jan. 6 that she was planning to go work for Trump in Florida *after* January 6 protest.”

Political dirty trickster Roger Stone denied Hutchinson’s testimony. He insisted that Meadows didn’t call him the day before the Capitol riot, as she claimed. Stone has long been accused of helping foment elements of the Capitol riot.

“I have never spoken to Mark Meadows on the phone on that date or any other date,” Stone wrote on Telegram.

Far-right operative Jack Posobiec also tried to cast doubt on Hutchinson’s claims. At one point, he shared a graphic of the presidential limousine known as the Beast in an effort to prove that Trump couldn’t have reached the wheel of the car.

But, as one reporter pointed out, not only does the graphic note that Trump could lower the partition and thus access the driver’s compartment, he wasn’t riding in the Beast that day, anyway.

In a bizarre reversal, Posobiec later tweeted that Trump wasn’t in the Beast, arguably rendering his previous argument moot. Though, true to form, he didn’t delete the prior tweet.

The fallout from Hutchinson’s testimony continued ricocheting across the internet on Tuesday afternoon.