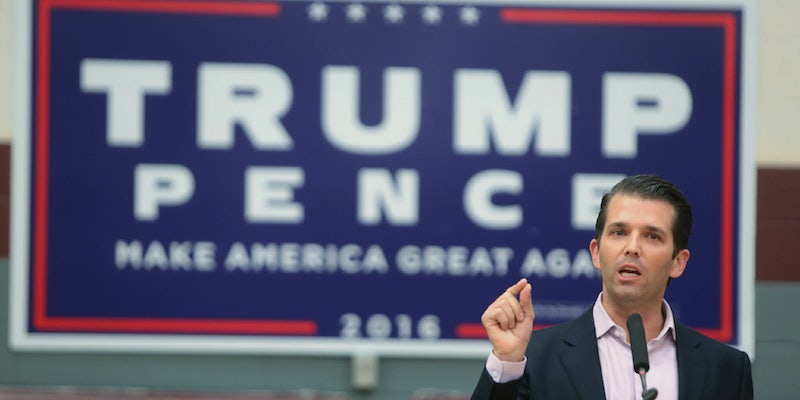 The effort to mainstream the name has succeeded.

Ever since the site Real Clear Investigations published a story last week where it claimed to have found the whistleblower who reported President Donald Trump’s call with Ukraine which kicked off an impeachment investigation, right-wing media sites have been trying to get the person’s name into the public sphere.

Sites like the Gateway Pundit, Breitbart, and Reddit’s r/The_Donald have pushed the purported name in an effort to get it into the public sphere and discredit the whistleblower, trying to unearth ties to the Obama White House and Joe Biden, making it seem like a long line in another deep-state plot.

On Wednesday, the effort to get the name into the public realm succeeded, as Donald Trump Jr. tweeted a Breitbart article about how the whistleblower supposedly worked on the infamous Steele dossier that kicked off the Russia investigation.

“Because of course he did!!!” Trump Jr. wrote. “Alleged ‘Whistleblower’… Worked Closely with Anti-Trump Dossier Hoaxer.”

The article on Breitbart claims that the whistleblower was on an email chain that discussed the Christopher Steele dossier, a piece of opposition research into Trump that detailed his ties to Russia and that he was “part of an Obama administration email chain celebrating the eventual signing of a $1 billion U.S. loan guarantee to Ukraine.”

That and other emails show [they] interfaced about Ukraine with individuals who played key roles in facilitating the infamous anti-Trump dossier produced by Fusion GPS and reportedly financed by Hillary Clinton’s presidential campaign and the Democratic National Committee.”

Being cc’ed on an email does not a deep state operative make, but alongside Sen. Rand Paul (R-Ky.), who said last night that he too was considering outing the whistleblower, the attempt to smear a White House official has gone from the far reaches of the internet to front and center in the public’s eye.

The Daily Dot could not independently verify the claim and has thus chosen not to share Trump’s tweet or name the alleged whistleblower.