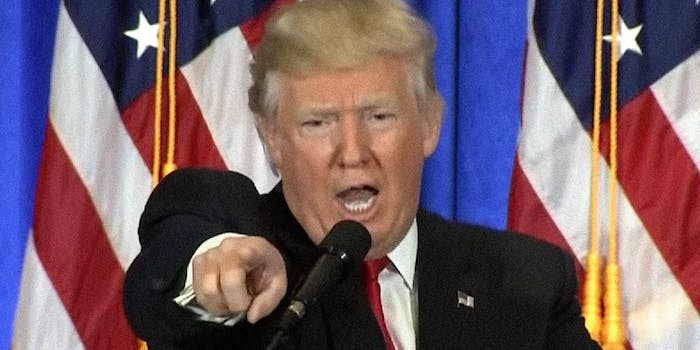 President Trump's attacks on the press attack the Constitution itself.

Being president means never having to say you’re sorry.

Republican Greg Gianforte apologized last week after allegedly “body-slamming” Guardian reporter Ben Jacobs, who questioned the Montana Representative about his thoughts on the GOP’s stalled health care bill. Gianforte initially blamed the incident, for which he will face misdemeanor charges, on “aggressive behavior from a liberal journalist” but changed his tune after winning Thursday’s special election race. The creationist claimed he’s “not proud of what happened” in a Friday press conference. No kidding.

Gianforte’s response is pathetic, but it’s better than the one from the White House. After months of attacking journalists on his Twitter account, President Donald Trump neglected to offer his condolences when a journalist was physically attacked. Instead of apologizing, the POTUS called the conservative lawmaker’s six-point win over folk singer Rob Quist a “great win for Montana.”

It’s far from hyperbole to say that Trump bears personal responsibility for the incident in Montana. Since announcing his run for the White House in June 2015, the president has continually targeted and demonized members of the press, whom he has proclaimed the “enemy of the American people.” Trump has called reporters “scum” and “sleazebags,” claiming that they are “out of touch,” “horrible,” “terrible,” and “dishonest.” He has alleged that the New York Times, a publication he refers to as “fake news,” purposefully prints stories it knows are false in order to discredit him. Trump repeatedly belittles and singles out members of the press, including mocking a disabled reporter and suggesting that a female debate moderator was on her period.

The commander-in-chief has even threatened to sue and imprison his critics, but he always stops just short of inciting violence against them. Check out this cleverly worded statement, delivered with as broad a wink as possible: “I would never kill them, but I do hate them,” Trump said of reporters at a December 2015 campaign rally in Grand Rapids, Michigan. “And some of them are such lying, disgusting people. It’s true.”

The president might believe these are just words. But when Trump says that he wouldn’t personally kill a journalist (but doesn’t actually condemn violence against the press!), it sends a covert yet clear message about what is acceptable.

As we’ve seen time and again, Trump’s inflammatory statements—whether they are about Latinos being rapists or the threat of militant Islam—incite real-world harm. A reporter for OC Weekly claimed in March that he and two photographers were attacked by Trump supporters while covering a “Make America Great Again” rally in Huntington Beach, California. Some of these attacks have come from inside Trump’s own campaign. A Time photographer was grabbed by the neck and placed in a stranglehold by Secret Service agents in February 2016. Agents threw him to the ground, and he collided with a table on his way down. A Breitbart journalist alleged Trump adviser and former campaign manager Corey Lewandowski physically pulled her out of a press conference last March.

How does the president respond to these incidents? He doesn’t. The Trump campaign simply denied the claims, even after a video of Lewandowski grabbing the reporter surfaced.

The president’s attacks on the press are not a new strategy. Sarah Palin, the former Alaska governor who ran for vice president in 2012, famously refers to journalism as the “lamestream media.” Nixon speechwriter William Safire called critics of the Vietnam War “nattering nabobs of negativism,” a phrase that became synonymous with the White House’s contentious relationship with the press after Vice President Spiro Agnew used it in a September 1970 speech.

Although scapegoating the media as a biased, liberal witch-hunt dates all the way back to Barry Goldwater, there’s a reason that targeting reporters has been so effective for Trump: Our trust in journalism is at a historic low. In 2016, a Gallup poll found that just 32 percent of Americans claimed that they have a “great deal” or “fair amount of trust” in news organizations, which is down 22 points since 2003, when President George W. Bush was running for re-election. And in a survey released earlier this year, 62 percent of respondents told Gallup that the media “favors one party over the other.” This includes 79 percent of Republicans, a 20-point increase over the last 14 years.

If Trump’s campaign views the media as the “opposition party,” even claiming that reporters cover up terrorist attacks, his diehard supporters listen to what he says—often unquestioningly. That has dire consequences, illustrated by the fact that Montana voters were perfectly willing to cast their ballot for a man who assaulted a journalist. One of Gianforte’s supporters told CNN when a recording of the attack leaked onto the internet, it was music to his ears. “That audio made me cheer,” the voter said.

Trump shouldn’t merely apologize for the role he’s played in inciting hate against an institution so valuable to the American public that freedom of the press is third among the rights listed in the First Amendment of the Constitution—right after religion and speech, two of Republicans’ favorite talking points. He should take responsibility for his role in suppressing media around the world. As the United States’ ranking for press freedom plummets (currently below Burkina Faso), countries like Cambodia and China have begun to adopt Trump’s dictatorial tactics. Russia’s Foreign Ministry has a web page devoted to discrediting “fake news,” meaning any media report the Kremlin doesn’t like. That is also, incidentally, also what Trump considers “fake news.”

If you were horrified and appalled that Trump was willing to put up with violent, criminal behavior from a politician who supported him in the 2016 election, be warned. The attacks on the press are just getting started.