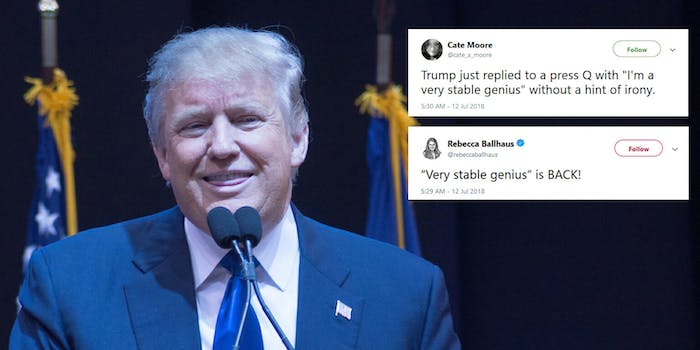 Trump once again dubs himself a ‘very stable genius’

President Donald Trump once again declared himself a “very stable genius” on Thursday, echoing a tweet he sent earlier this year that sparked an enormous mocking backlash online.

The president, speaking after a NATO summit in Brussels, made the comment when talking about his use of social media during a press conference. Specifically, the reporter asked if he would tweet things on Air Force One after leaving the summit that would contradict his public positions.

“No, that’s other people that do that. I don’t. I’m very consistent. I’m a very stable genius,” Trump said.

Donald Trump is asked whether he'll be saying one thing at NATO and tweeting another after he departs.

In January, Trump dubbed himself a “very stable genius” and “like, really smart” in a series of tweets where he lamented about the investigation into Russian interference in the 2016 election and pushed back against calls that he was mentally unfit to hold office.

“….Actually, throughout my life, my two greatest assets have been mental stability and being, like, really smart. Crooked Hillary Clinton also played these cards very hard and, as everyone knows, went down in flames. I went from VERY successful businessman, to top T.V. Star…..,” he wrote, adding in another tweet: “….to President of the United States (on my first try). I think that would qualify as not smart, but genius….and a very stable genius at that!”

The tweet was quickly mocked by people online, and after he resurfaced it again on Thursday, the jokes came quickly.

“Very stable genius” is BACK!

… in front of the entire world.

I'm going to have to call BULLSHIT on that one. pic.twitter.com/by8NYFbXpj

Because who among us doesn't call himself a "Stable Genius" in a news conference in front of the entire frigging world.

“I’m a very stable genius”. Yup, Trump just said that in his press conference during the NATO Summit.

Trump just replied to a press Q with "I'm a very stable genius" without a hint of irony.

And despite the president’s insistence that “other people do that,” that’s exactly what he did just last month.