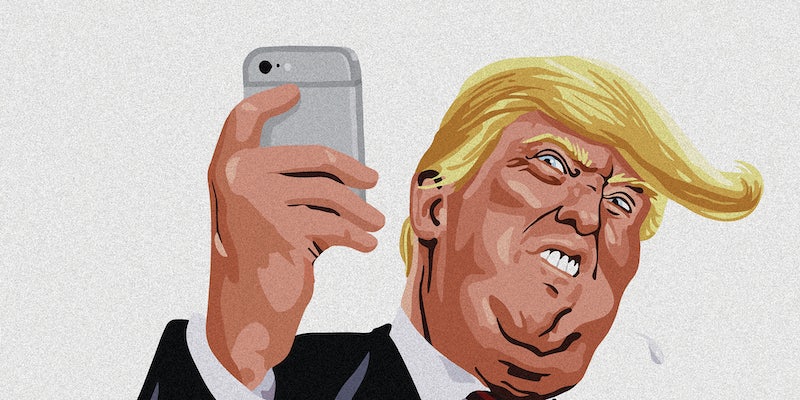 Former President Donald Trump is putting forth novel arguments in his federal lawsuit against Twitter for banning him.

In a court filing, Trump argues that Twitter’s terms of service don’t apply to him because he was president when it permanently suspended him. He’s also arguing that the terms don’t apply because Twitter is so addictive he didn’t have a choice but to accept them.

Trump is currently fighting Twitter’s motion to move the case from Florida, where he filed suit, to California. Twitter’s terms of service (TOS) designate courts in San Francisco County as the exclusive venues in which it can be sued, otherwise known as a forum selection clause. Forum selection clauses are standard in contracts.

In addition to the fact that he lives there part of the year, Trump is likely suing in Florida because his legal team believes its courts are more sympathetic to his case. Earlier this year, Florida passed a law that implemented significant fines against social media companies for banning political candidates. The law was subsequently deemed unconstitutional and blocked.

Trump’s motion also claims the TOS shouldn’t apply to him because he used Twitter as a primary means of communicating with the public while he was president.

Later in the motion, Trump submits an even more intriguing argument. Twitter, he alleges, is an intentionally “addictive” service. As such, the motion claims, Trump had no choice but to agree to its terms of service and any updates to the same.

“Thus, even when Defendant prompts its Users to review its updated TOS, Defendant knows that its Users are dependent on its services and more than likely than not to accept its changes, whatever they may be,” they write, later adding, “Over time, the bargaining power between social media companies and their Users shifts dramatically.”

Twitter users are largely amused by this argument. Many take it to mean that Trump is saying he’s so addicted to Twitter that he couldn’t control himself.

Since being permanently banned from Twitter in the wake of the Capitol riot, Trump has employed a variety of means of communicating with the public. He has given speeches, launched (and quickly abandoned) a blog that reportedly no one read.

Amid all of this, he is suing Twitter and other social media companies that banned him in an effort to force them to give him his accounts back.