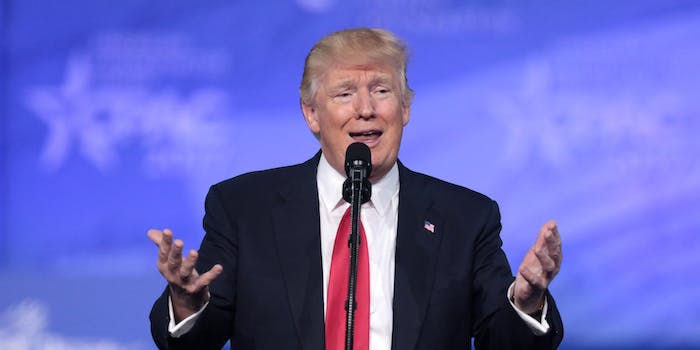 The White House is denying it.

In a comment to the Daily Dot, however, the White House strenously denied it.

“This is absolutely not true,” said White House spokesperson Judd Deere, but added that they do not comment on security matters.

Gevers told the newspaper the president’s account did not have two-factor authentication turned on. After supposedly being able to access the account so easily, he alerted Trump, and various American agencies including the Secret Service.

“I expected to be blocked after four failed attempts. Or at least would be asked to provide additional information,” Gevers told the newspaper.

The Secret Service did not return a request for comment by the Daily Dot. We’ll update this story if we hear back.

Twitter also denied the claim in a statement to the Daily Dot.

“We’ve seen no evidence to corroborate this claim, including from the article published in the Netherlands today. We proactively implemented account security measures for a designated group of high-profile, election-related Twitter accounts in the United States, including federal branches of government.”

Earlier this week, when Trump said “nobody gets hacked,” Gevers also tweeted at Trump, the Cybersecurity and Infrastructure Security Agency, the White House, Donald Trump Jr., the Trump campaign, and Twitter’s Security accounts saying that he had been trying to alert them to the fact that he was able to access the president’s account.

Gevers told de Volkskrant that he noticed two-factor authentication was added to Trump’s account the day after he was able to access Trump’s account. He claims the Secret Service also contacted him to talk about the easy access.

Gevers did not provide evidence that the Secret Service contacted him however.

Gevers also claimed to be able to access Trump’s Twitter in 2016, when a group of hackers guessed “yourefired” as the password because it was the same as what was found in a 2012 LinkedIn password breach.

Gevers also spoke with TechCrunch about guessing the “maga2020!” password.

You can read all of the de Volkskrant report here.