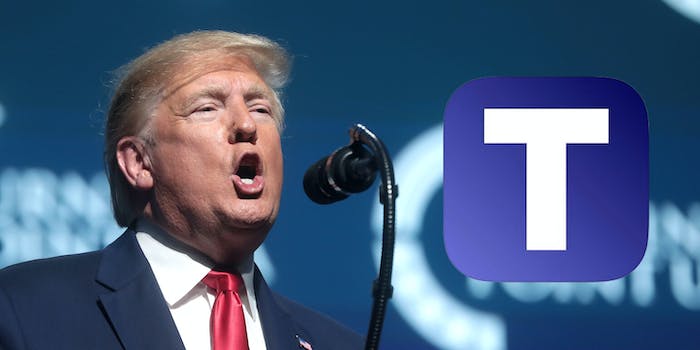 Trump's social media app has had some hiccups along the way.

Truth Social’s launch will be on Feb. 21, which is the Presidents Day holiday. The launch date is likely a nod to his false claims that the 2020 election was fraudulent.

Screenshots of the app show that Trump’s social media platform is very similar to Twitter, with a feed of posts that users can like, share, or comment on. The app will join numerous other apps that are vying for the attention of the far right and the former president’s supporters such as GETTR, Gab, Parler, and others.

The Apple App Store page for Truth Social allows for people to pre-order the app and shows a notice that is expected to launch on Feb. 21.

It had been long-rumored that Trump would launch his own social media platform after he was booted off mainstream outlets like Twitter and Facebook following the Capitol riot last year.

Before creating Truth Social the former president dabbled in blogging by creating his own website that hosted things he normally would have tweeted. However, the blog—called From the Desk of Donald J. Trump—was shuttered after only a month after it reportedly failed to get much engagement.

Since being announced in October, Truth Social has had numerous hiccups. Shortly after the announcement, a sign up link was discovered and people claimed numerous high profile handles associated with Trump. The site was quickly taken over by trolls. Numerous items in the platform’s terms of service also inspired a wave of mockery.

Last month a test version of “Truth Social” was located online, however it did not allow for users to register accounts.