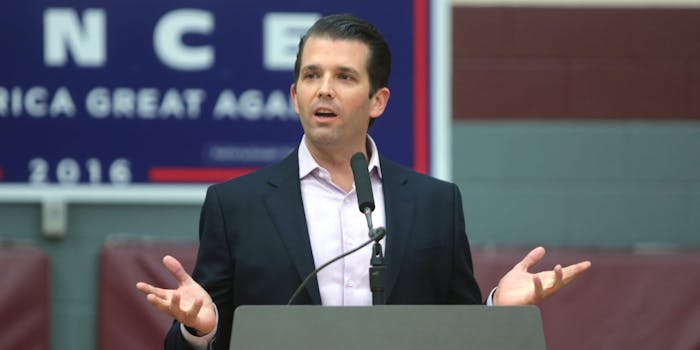 Part of the Trump family was on the offensive.

Both President Donald Trump and his son, Donald Trump Jr., went on the offensive following Sen. Elizabeth Warren (D-Mass.) taking a DNA test that showed she had some Native American ancestry.

The president, who has mockingly referred to the senator as “Pocahontas,” tweeted about the DNA results on Tuesday morning, latching onto a statement from the Cherokee Nation, which reportedly called DNA tests “useless to determine tribal citizenship.”

“Pocahontas (the bad version), sometimes referred to as Elizabeth Warren, is getting slammed. She took a bogus DNA test and it showed that she may be 1/1024, far less than the average American. Now Cherokee Nation denies her, “DNA test is useless.” Even they don’t want her. Phony!” the president wrote in a series of tweets. “Now that her claims of being of Indian heritage have turned out to be a scam and a lie, Elizabeth Warren should apologize for perpetrating this fraud against the American Public. Harvard called her “a person of color” (amazing con), and would not have taken her otherwise!”

“Thank you to the Cherokee Nation for revealing that Elizabeth Warren, sometimes referred to as Pocahontas, is a complete and total Fraud!”

Pocahontas (the bad version), sometimes referred to as Elizabeth Warren, is getting slammed. She took a bogus DNA test and it showed that she may be 1/1024, far less than the average American. Now Cherokee Nation denies her, “DNA test is useless.” Even they don’t want her. Phony!

On Monday Trump Jr. posted three anti-Warren Instagram posts, including one where a Native American headdress was Photoshopped onto the senator.

The meme mocks the findings of the DNA test with “1/1024th Native American” written under the changed picture of Warren and “1024/1024th Your President” written under Trump.

Amazing thread. You think if a conservative lied about their heritage, presumably for special treatment throughout their career, that the media would give them the pass they have given Warren? Not for one second! https://t.co/hwUTlkH81J

Awkward… Seems like Elizabeth Warren has lost the Cherokee Nation.

In the midst of his attacks against Warren, Trump Jr. also retweeted a post reminding people that “Wing Night” was back at the Trump Hotel in Washington D.C.