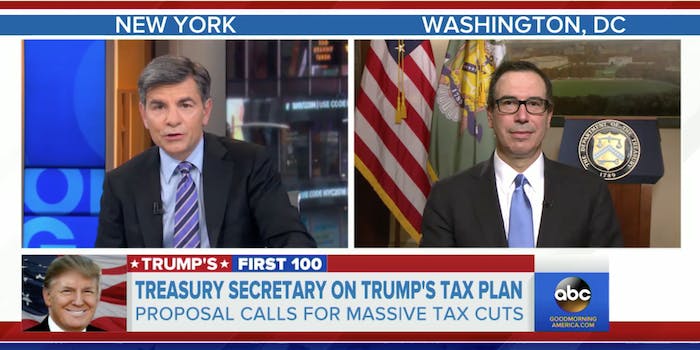 Washington is awash in discussion over the Trump administration’s new tax plan, but one key question looms large over the debate: How much will the proposed changes affect middle-class Americas?

Treasury Secretary Steve Mnuchin has a less than reassuring answer.

In an appearance on Good Morning America on Thursday, Mnuchin was asked whether the White House’s proposal would result in the middle class paying less. “That’s our objective,” Mnuchin said. But is it a guarantee?

“I can’t make any guarantees until this thing is done and it’s on the president’s desk. But I can tell you, that’s our number one objective in this,” Mnuchin said.

Mnuchin’s answer may be honest, but it is unlikely to help sell the plan to the American people given other ambiguities about the impact of the plan.

Here’s what we do know about the proposal so far: The White House tax plan would reduce the tax rate for corporations and small businesses to 15 percent, consolidate the current seven tax brackets into just three, reduce the top tax bracket from nearly 40 percent to 35 percent, eliminate the estate tax (known derisively as the “death tax”), and simplify deductions across the board.

While few Americans will balk at pay lower taxes, the consequences both large and small remain unclear. Wealthy Americans are expected to benefit greatly from the plan, and President Donald Trump could personally benefit from many of the proposed tax breaks. (Mnuchin struggled to avoid answering a question about how much Trump would benefit from the plan during Wednesday’s briefing.) And an early analysis from the non-partisan Committee for a Responsible Federal Budget estimates that the tax cuts would put America $3 trillion to $7 trillion dollars in debt over the next 1o years without significant spending cuts.

As for those of us in the middle class, however, the impact on our bank accounts is, apparently, anything but guaranteed.