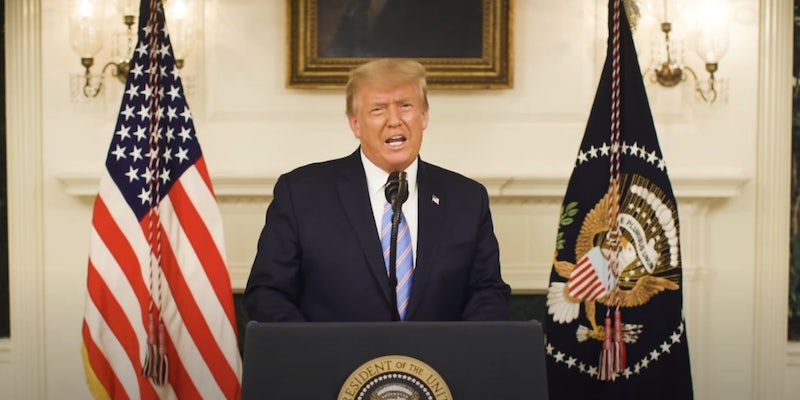 Some feel betrayed by Trump; others are convinced the video isn't him.

After months of fanning the flames that contributed to this week’s Capitol riots, on Thursday night President Donald Trump released a video in which he condemned the violence and promised the perpetrators would be prosecuted. Now some of his supporters are claiming it’s a deepfake.

“I am outraged by the violence, lawlessness, and mayhem,” Trump said in the video.

“The demonstrators who infiltrated the Capitol have defiled the seat of American democracy,” he added.

“To those who engaged in the acts of violence and destruction: You do not represent our country. To those who broke the law: You will pay.”

The outgoing president also vowed to work towards a peaceful transition of power in what is the first time he’s publicly and unequivocally acknowledged his defeat.

“To all of my wonderful supporters: I know you are disappointed but I also want you to know that our incredible journey is only just beginning,” Trump concluded.

The video is Trump’s sharpest rebuke of his supporters who stormed Congress in Wednesday’s riots that left five dead and the nation reeling.

Some of the mob reportedly intended to lynch Vice President Mike Pence, and possibly House Speaker Nancy Pelosi (D-Calif.) and Senate Minority Leader Chuck Schumer (D-N.Y.). A noose and gallows were erected nearby.

Trump’s statements on the video stand in stark contrast to the things he’s said for years, including during the attempted insurrection in which his supporters assaulted people and police, committed vandalism and theft, and even smeared feces around the Capital.

It didn’t take long for his hardcore base, many of whom believe conspiracy theories like QAnon, to come up with a theory to explain why he would turn against them after all this time. They believe the video, which Trump posted on his Twitter account, is a deepfake.

They’re pointing to things like his hair color, head movements, and other meaningless details as evidence of this unfounded theory.

“Anyone else notice this eerie deepfake look to Trump, or is he airbrushed,” wondered one on Twitter.

“So, what did they do with Trump?” a Parler user mused. “I don’t know what to think about it. There are loads of posts about it.”

While some clung to the false assertion that the video wasn’t really Trump, others felt betrayed.

A leader of the Proud Boys, a violent hate group that plotted some of Wednesday’s violence and is planning more in the future, raged on Parler, “I won’t hang on Trump’s dick especially after he just said the patriots who took the capital yesterday would be ‘dealt with.'”

“… He just started the fire and walked away and left us to deal with the charred remains.”