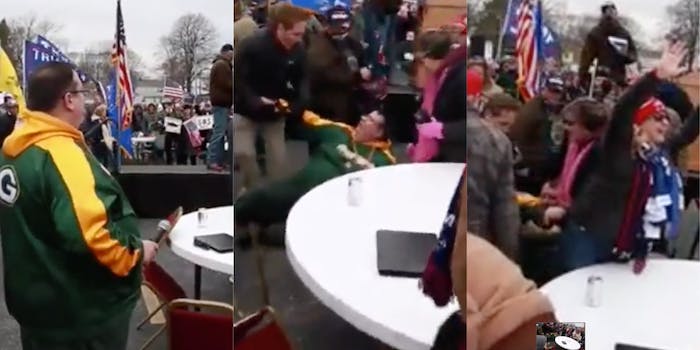 'I'm not going to lose my license. I will stop the rally if you don't sit down.'

The video starts with a man identified as Nicholas Alioto, the general manager of Serb Hall, the venue where the rally was held, making an announcement. He’s imploring the Trump supporters to sit down and obey Milwaukee County’s social distancing orders.

The Trump supporters gathered at the venue to protest the 2020 presidential election results and promote baseless allegations of voter fraud, which the Trump administration has perpetuated.

“I’m telling you now that the city of Milwaukee is here,” says Alioto, as the crowd gets riled up. “I’m not going to lose my license. I will stop the rally if you don’t sit down.”

A woman tells him to “shut the fuck up.” Another man yells, “It’s a protest.”

Suddenly, an upset man approaches to snatch the microphone out of Alioto’s hand, which leads to a brief scuffle. The manager ends up hitting a nearby table and tumbling to the ground.

“One gentleman rushed me and pushed me. He twisted the microphone out of my hand. As he was moving away, he pushed me again,” Alioto told the Milwaukee Independent. “I attempted to get the microphone back and grabbed it. At that point, a number of people in the crowd pushed me to the ground and started kicking me.”

The video also shows a Trump supporter standing in front of the scuffle and waving her hands, uselessly trying to cover up what’s happening behind her. But rather than hide the evidence of Trump supporters misbehaving, she obviously brings more attention to the disturbance.

A Redditor called this action out, asking why it seems prevalent in Trump supporter-related videos.

“They do this in every video,” u/Eboo143 wrote. “Surround the action and try to block people from recording it. They know what they are doing is wrong.”