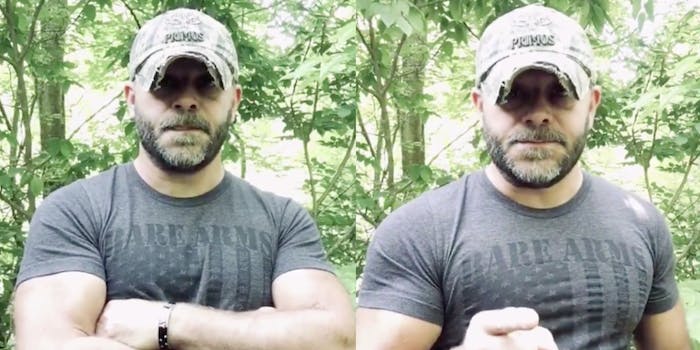 An Army veteran who posted a video threatening violence against Black Lives Matter protesters was seemingly banned from Twitter after his threats went viral.

Cory Fitzpatrick, who went by the Twitter handle @gunbunny913, said he recorded the video as a “warning.”

“It’s about that time all the veterans, all the American-loving people, all the patriots get together in one big collective group and just go absolutely pummel BLM or anybody else that gets in the way,” he says, slamming his hands together for emphases. “Flatten ‘em all out.”

Fitzpatrick goes on to insist that veterans don’t want to be bothered but that if people “keep pecking” at them, eventually, they’re going to “blow up.”

“And whatever happens to you is none of our concern. Period,” he says. “The way we look at it, you’re the enemy. You’re the enemy of this country.”

He claims he’s not inciting violence but is rather issuing a warning because “whenever it gets to that point, we will fight back. And when we do, it’s all over.”

At no point does Fitzpatrick give any clue as to what “that point” at which he claims all the veterans will fight back is, or what exactly makes Black Lives Matter protesters the enemy of America. He does, at one point, refer to the movement as “racist, fascist pieces of shit.”

Contrary to his suggestion that veterans want to be left alone, Fitzpatrick concludes the video by suggesting he’s willing to drive “many miles” across the country to go deal with the people he’s openly threatening.

“This is gunbunny,” he says. “You’re being warned.”

The video had been shared over 8,000 times, with 18,000 likes at the time it was recorded and re-uploaded to YouTube and Reddit.

Fitzpatrick’s Twitter account, which had 10,000 followers and featured hashtags such as #Trump2020 and #AllLives Matter in his bio, appears to have been disabled by Twitter at some point after his rant.

His YouTube channel has also been stripped of videos and deleted, while his Instagram has been set to private.

While an unfortunate number of people appear to have agreed with Fitzpatrick’s threats against protesters standing up to racism and police brutality, the backlash generated by his video was also strong.

It’s obvious Fitzpatrick believes veterans of the U.S. armed forces and Black Lives Matter protesters are entirely divided, on two different sides of the aisle, but other vets pushed back against his assumptions as well as his threats.

“I’m a veteran too, but I’m gonna pass,” @ccie2711 tweeted in response to the original video. “I’ll defend your right to have your opinions, even if I think they are completely vile & wrong. But I’ll never consider another American ‘the enemy’ because they don’t share my values. That would mean I don’t understand what freedom is.”

Drew Lieb, whose Twitter bio identifies him as a Navy vet, agreed.

“When you start looking at your fellow Americans as the enemy, I beg to differ that you take your oath seriously. You’re lost, confused by lies you read on the internet… United we stand, divided we fall; Trump is the great divider & you took his poison,” Lieb tweeted.

In fact, vets have been spotted at the Portland protests, supporting BLM, not railing against it, though their status as veterans have done nothing so far to stop them from being subjected to the same violence from anonymous federal agents as everyone else protesting.