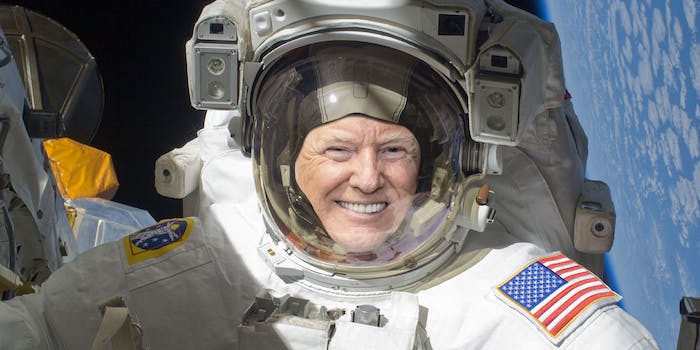 What is the real move behind space force?

The announcement that President Donald Trump wanted to create a “Space Force” that would serve as a co-equal branch of the Armed Forces brought a wide range of reactions.

Some experts believed we needed it to defend U.S. interests above the clouds, including protecting our satellites and preventing orbital bombardment by China or Russia. Others posited it as a dangerous step toward the irrevocable militarization of space. And some said it didn’t matter, either because the unilateral expansion of the armed forces is beyond the scope of presidential power, or because Trump says he’s going to do a lot of things he never ends up doing.

It caught on big with Trump supporters, who have taken to chanting it at Trump rallies.

But it was an even bigger hit with the conspiracy theory community, where the announcement of Space Force was greeted with giddy expectation that we were drawing ever closer to the hallowed day when “full disclosure” would be achieved.

Disclosure is the UFO community’s term for the government finally coming clean about the existence of alien life, alien technology acquired by major corporations, visitations by alien ships to Earth, and even secret treaties between alien races and the U.S. As the conspiracy goes, disclosure has been imminent at various times, only to be stopped by nefarious forces in the government and business who want to keep a monopoly on this knowledge.

Those who believe that such an event is being held up by the same deep state bureaucrats holding up every other good thing Trump wants to do also think that Trump’s Space Force announcement is nothing less than a massive middle finger to these forces.

Understand that with the #SpaceForce, the advanced technologies (free energy, antigravity) kept in secret think-tanks within Lockheed, Boeing, & other corporate contractors will now have an avenue to be released publicly.

This is HUGE and something the Deep State does NOT want.

“[T]he real purpose in Trump proposing the Space Force is that he wants to accelerate the disclosure process by which the technologies and know-how that are used in the Air Force’s Secret Space Program,” reads a June 20 post on popular disclosure blog Exopolitics, “are taken away from the multiple bureaucracies and corporations that secretly run it—the Military Industrial Complex/Deep State.”

This concept of a “secret space program” is a major one in UFO/disclosure circles. It has plenty of tangents and rabbit holes, but essentially claims that the Nazis had extremely advanced propulsion technology that the U.S. military absorbed and used to create a parallel space program, with bases on the moon, anti-gravity vehicles, mind control, complex space weapons, and all kinds of other deeply classified goodies.

Some versions of the “secret space program” are even weirder, involving alien civilizations waging vast galactic wars with Earth in the middle, spared only by Dwight Eisenhower’s signing of a pact with one of the alien factions, a long-speculated document called the “Greada Treaty.”

The Space Force – Is It Paving The Way For Secret Space Program Disclosure? https://t.co/ZOR3H6Ep95

As with many conspiracy theories, the secret space program has a grain of truth to it—there are indeed a number of advanced experimental Air Force space programs involving fantastical technology, and the Nazis did have rocketry that was way beyond anything anyone else had. But that’s a long jump to secret moon bases, alien treaties, and galactic wars. None of those things are supported by evidence.

The timing of the Space Force announcement was also speculated to be a reaction to videos released by NASA at the end of 2017 showing what many people both inside and outside the UFO community truly thought were alien spacecraft caught on camera by Navy jets.

They also came with the spooky revelation that the government had spent $22 million on something called the “Advanced Aerospace Threat Identification Program.”

Surely the timing of Space Force, coming six months after these videos hit the internet, couldn’t be a coincidence, right?

As it turns out, the AATIP was one of countless Senate-funded boondoggles, one that, ironically, spent too little money to actually be an effective program to discover the secrets of alien ships. And the “UFO” seen by Navy fighter plane cameras was an optical illusion caused by the heat of the plane taking the video. It fueled conspiracy theories, but it wasn’t an alien ship, just a trick of the light.

One idea that was truly pulled out of thin air was that Trump proposed space force as some kind of setup for either a false flag attack that will be blamed on aliens, or a real attack by aliens that the U.S. will be powerless to stop without weapons in space.

Obviously, none of this is supported by available evidence. Nonetheless, an “alien attack” story that started on a satire site got so much traction that Factcheck.org had to debunk it. And a thread accusing the government of using aliens as the perpetrators of a 9/11 style attack got a lot of play on Reddit, but most of that was people arguing over whether dinosaurs were real.

Right now, Space Force exists only as a piece of paper, with no infrastructure or mission. There’s no plan to implement it, and no money allocated with which to do it. It might never even get off the ground. But if it does, expect numerous colorful conspiracy theories to follow it—with or without the disclosure of Nazi moon bases and secret alien treaties.