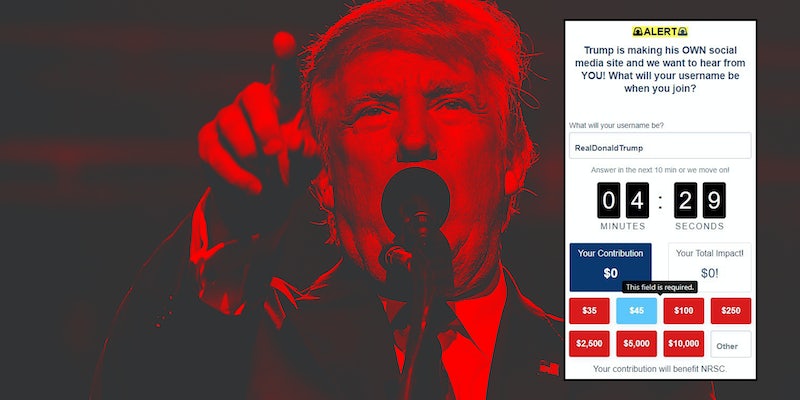 Texts asking people to join include a link that reroutes to the WinRed.

Former President Donald Trump is inviting people to reserve their usernames on his new social media platform. But it might cost you.

Trump’s been teasing the launch of Truth Social for months. Last week, Rep. Devin Nunes (R-Calif.) announced that he was resigning from Congress to become the platform’s chief executive officer. He takes the helm of a company that’s already faced troll attacks and is under federal investigation.

Trump isn’t letting these hindrances stand in his way. Truth Social has reportedly raised $1 billion from a group of investors.

To date, Truth Social is essentially what’s been described as “a landing page with a sign up sheet.” It’s unclear how many people have signed up for the platform.

Some have concerns that the company’s value will depend on how many people sign up for the site.

Trump appears to have partnered with the National Republican Senatorial Committee (NRSC) to encourage more registrations and raise some money.

The Daily Dot obtained a screenshot of one of these texts. It promises that “the wait is over.”

“TRUMP ALERT: Trump is making his comeback with a social media platform all his own, and we want YOU to join!” it says.

The link included in the text directs to a page inviting you to sign up for the platform.

Once you submit your name on the page included in the text, it sends you to the NRSC’s WinRed fundraising page to reserve your username.

There’s a catch, though. In order to reserve a username, you have to make a donation to NRSC. If you try to submit without donating, a notice appears in the donation portion reading, “This field is required.”

Truth Social’s site allows you to “join the waiting list” for no cost—but doesn’t allow you to reserve a username. Trump did not immediately respond to an inquiry sent via his website seeking to confirm whether he’d partnered with the NRSC to get people to sign up for Truth Social and donate to the committee.

It’s not clear if this is just marketing or a donation will actually reserve your username, as the site doesn’t provide any confirmation and it’s not possible to sign in to the platform at present.

Those who sign up for Truth Social on the NRSC’s page are deluged with as many as four texts per day asking for more money. The texts come from the NRSC’s phone number and include links to its fundraising site along with pleas to the tune of, “[W]e’ve reached out FOUR TIMES already! Take our Trump Patriot Poll here to help RETAKE TRUMP’S MAJORITY” and “Stop ignoring…! Tell us your Trump Social Media Username! Click HERE to correct the record.”

The NRSC did not respond to requests for comment Monday morning.

NRSC’s page to reserve a username on Truth Social pre-selects monthly recurring donations. The notice that it’s a recurring donation is in a smaller, lighter font beneath large, bold text about being a “top Trump supporter” and how much he “needs you.”

Trump isn’t a senatorial candidate. It’s widely believed that he will run for president in 2024.

Automatically pre-selecting recurring donations created some controversy for former Sen. Kelly Loeffler (R-Ga.) in her failed election campaign last year. The Atlanta Journal-Constitution reports that Loeffler had to refund millions of dollars to donors, many who said they’d unintentionally signed up for recurring donations.

A law professor who specializes in political finance told the Journal-Constitution this tactic is “semi-fraudulent or intentionally deceptive.”

After being questioned about the policy, Loeffler reportedly stopped auto-selecting recurring donations on her fundraising platform.

The Daily Dot unselected monthly recurring donations and gave $1 to reserve a username on Truth Social.

The link to reserve a username then directed back to the NRSC’s fundraising page. The URL includes the phrases “tell us your username” and “panel upsell page.”

There begins a series of questions and offers, the answer to which is either no, or yes and here’s some more money—”decline” or “donate,” respectively.

The questions were standard fare about whether you support Trump or plan to join Truth Social. One of the offers was for a Trump Christmas stocking.

Truth Social is supposed to launch next year.