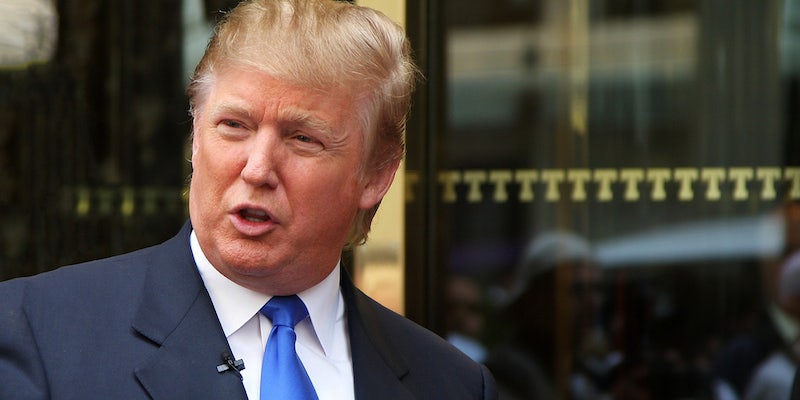 Trump reacts to unverified Russian docs: ‘Are we living in Nazi Germany?’

'A COMPLETE AND TOTAL FABRICATION.'

President-elect Donald Trump is having a rough morning.

Approximately 12 hours after media reports surfaced detailing an unverified dossier of documents accusing Trump and his team of scandalous, treasonous, nefarious things linked to Russia, he began to tweet.

The unsubstantiated documents, which had been circulating among journalists since at least late October, became public on Tuesday evening after BuzzFeed News published them in full—sparking intense criticism—following a report on their contents by CNN.

Over the course of four tweets, Trump denied the accusations in the documents, which include the claims that Trump’s team has been in contact with Russia’s government for five years and that Russian intelligence has evidence of Trump hiring prostitutes to perform lewd sex acts—purported evidence that could be used to “blackmail” Trump, according to the unverified report.

Indeed, Trump denied having anything to do with Russia at all, pinned the leak of the documents on his “crooked opponents,” condemned the intelligence community for allowing their leak, and questioned whether we are now “living in Nazi Germany.”

Intelligence agencies should never have allowed this fake news to "leak" into the public. One last shot at me.Are we living in Nazi Germany?

Trump has come under fire repeatedly over the course of his campaign and his time as president-elect for being friendly to Russia and its president, Vladimir Putin, while questioning the U.S. intelligence community’s findings that Putin ordered information warfare campaigns against Trump’s Democratic opponents. Further, Trump has used false statements and misleading inferences (i.e. referring to Democratic nominee Hillary Clinton as “Crooked Hillary”) as political weapons.

Since the CNN and BuzzFeed News reports, a number of narratives have emerged. First, 4chan users have claimed (so far without real evidence) that one of them made the whole thing up as a hoax, which has now spiraled out of control. The 4chan narrative is seen as further discrediting the documents, though there’s no proof 4chan users were involved in their creation.

Second, many journalists have begun to move past the salaciousness in the documents—they include the phrase “golden showers,” for example—and onto the official actions of U.S. officials. The FBI, for example, reportedly attempted to obtain a warrant to surveil four members of Trump’s team from the secretive Foreign Intelligence Surveillance Court (FISC), according to the Guardian. FISC reportedly denied the request because the warrant was too broad. Other reports have focused on questions from senators, including McCain and Sen. Ron Wyden (D-Ore.), who question Comey about any potential ongoing investigations into the Trump team’s potential contact with Russia.

All said, this story—as unsubstantiated as it may be—is not going away and will likely be the center of attention at Trump’s first major press conference since the election, which will take place at 11am ET today.