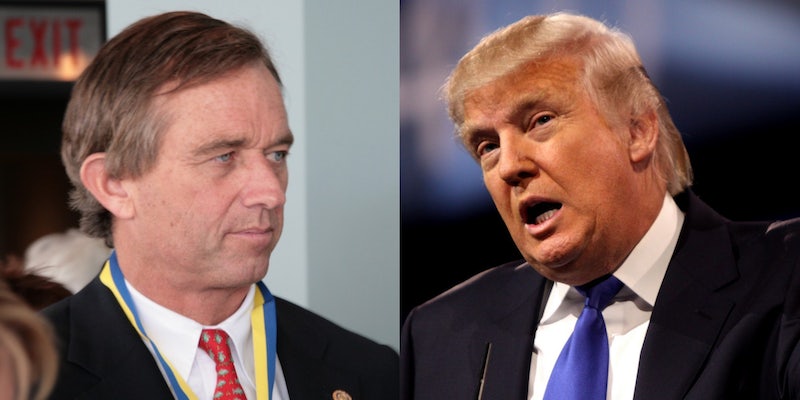 Robert F. Kennedy Jr. has written a book about vaccines and autism.

In a move that may pose a challenge to public safety and scientific evidence, President-elect Donald Trump on Tuesday allegedly asked a vaccine conspiracy theorist to lead a commission on the safety of vaccinations.

Environmental attorney and activist Robert F. Kennedy Jr. met with Trump at the president-elect’s request. Following the meeting, Kennedy told reporters that Trump “asked me to chair a commission on vaccine safety and scientific integrity.”

Trump’s transition team did not respond to our request for comment on the meeting with Kennedy.

Kennedy is an adamant believer in the falsehood that vaccines—specifically, the preservative thimerosal used in some vaccines—is linked to the development of autism. He has repeatedly spoken about the issue over the past decade and wrote a book arguing against the use of thimerosal, which includes mercury as an ingredient, in 2014.

To be clear: Scientists have found no evidence that vaccines cause or contribute to autism. The single study that claimed they did was found to be fraudulent and was retracted. The Centers for Disease Control features nine separate studies disproving adverse effects of the use of thimerosal. And nearly all vaccines for children, save the flu vaccine, no longer use the preservative and have not done so since 2001, reports the Atlantic.

Despite this, Trump has consistently voiced concern about vaccines and autism, particularly subjecting children to multiple vaccines at once.

Healthy young child goes to doctor, gets pumped with massive shot of many vaccines, doesn't feel good and changes – AUTISM. Many such cases!

With autism being way up, what do we have to lose by having doctors give small dose vaccines vs. big pump doses into those tiny bodies?

If I were President I would push for proper vaccinations but would not allow one time massive shots that a small child cannot take – AUTISM.

“You take this little beautiful baby, and you pump—I mean, it looks just like it’s meant for a horse, not for a child, and we’ve had so many instances, people that work for me,” Trump said. “Just the other day, two years old, two-and-a-half years old, a child, a beautiful child went to have the vaccine, and came back, and a week later got a tremendous fever, got very, very sick, now is autistic.”’