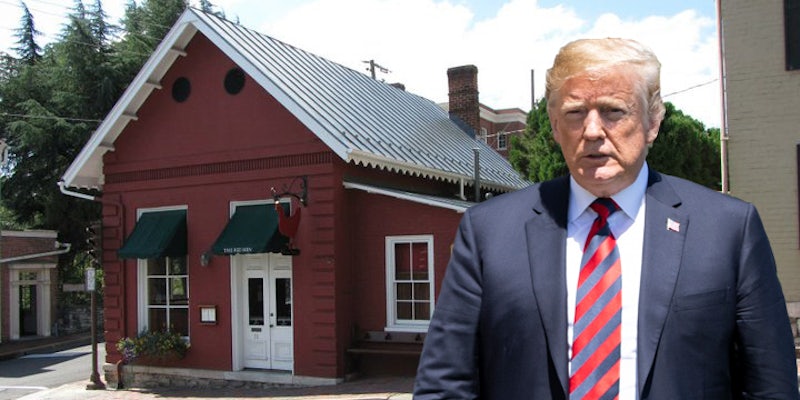 The president weighed in.

By now you are most likely aware of the drama surrounding Lexington restaurant the Red Hen refusing to serve Sarah Sanders, but what you didn’t know (but you also completely and utterly knew with everything in your heart because that’s just how things are these days in our online hell prison), was the president was going to give his opinion.

“The Red Hen Restaurant should focus more on cleaning its filthy canopies, doors and windows (badly needs a paint job) rather than refusing to serve a fine person like Sarah Huckabee Sanders,” Trump wrote in a tweet on Monday. “I always had a rule, if a restaurant is dirty on the outside, it is dirty on the inside!”

The Red Hen Restaurant should focus more on cleaning its filthy canopies, doors and windows (badly needs a paint job) rather than refusing to serve a fine person like Sarah Huckabee Sanders. I always had a rule, if a restaurant is dirty on the outside, it is dirty on the inside!

So, that tweet, which on its face is just the president babbling about the latest micro-controversy his administration seems to be embroiled in every day, raises a HOST of questions. Questions like:

Did the president spend this morning looking at pictures of the Red Hen online? This is the (supposedly) busiest man alive, and he was scrolling through Google Images to look at the quality of the restaurant? This appears to be “filthy canopies” he is referring to; was he casually browsing the web this a.m.?

Or did he (more likely) catch a segment about it on FOX News and from the screenshot on his TV deem the restaurant to be dilapidated?

Does the president understand the concept of rustic charm? (That is an easily answerable “no.”)?

Most importantly, is he saying his press secretary has crappy taste? He kinda is! If he, Trump, a self-proclaimed genius, would never do such a thing, what kind of lesser person would be so uncivilized as to go to a dirty restaurant?

However, one person is credited with saying he would never eat in a restaurant with a dirty bathroom.

“If the restaurant can’t be bothered to replace the puck in the urinal or keep the toilets and floors clean, then just imagine what their refrigeration and work spaces look like.”

That would be Anthony Bourdain.