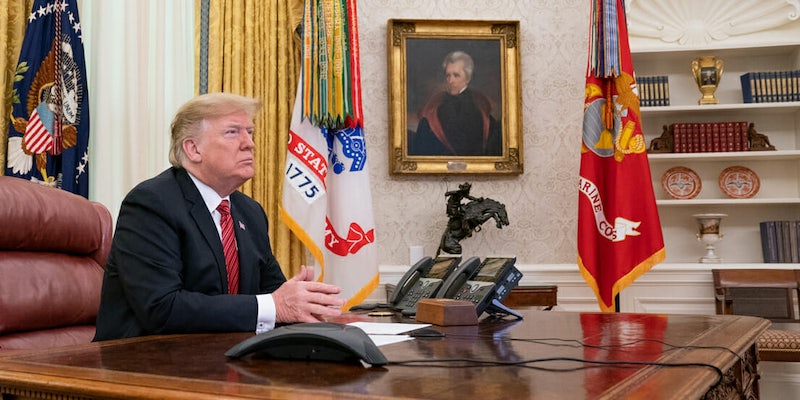 Did Trump lie about being in the Oval Office this morning?

Some people think he was lying.

President Donald Trump asked Democrats to work with him on securing funding for his border wall on Monday morning, adding that he was “in the Oval Office” ready to try and drum up votes.

“I’m in the Oval Office. Democrats, come back from vacation now and give us the votes necessary for Border Security, including the Wall. You voted yes in 2006 and 2013. One more yes, but with me in office, I’ll get it built, and Fast!” the president tweeted.

The president deleted an earlier version of the tweet where he mistakenly wrote “3013” instead of “2013.”

I’m in the Oval Office. Democrats, come back from vacation now and give us the votes necessary for Border Security, including the Wall. You voted yes in 2006 and 2013. One more yes, but with me in office, I’ll get it built, and Fast!

However, not everyone thinks the president was in the Oval Office—as pool reports suggested that there was no Marine stationed outside the West Wing on Monday morning, which is routine when the president is in the office.

Brian Karem, a White House correspondent for Playboy, took a photo on Monday that showed no Marine was stationed there.

POTUS tweet minutes ago claimed he was in the Oval Office. No marine there so that’s another lie. ⁦@realDonaldTrump⁩ pic.twitter.com/rnJnQt88HO

Other people did as well.

Trump just tweeted “I am in the Oval Office”. Says he’s working, unlike the Dems. But when POTUS is in West Wing – ie in Oval Office – a marine always stands guard at that door. There has been no marine seen there this morning. pic.twitter.com/2bX33hKvo6

However, Zeke Miller, the White House reporter for AP, noted that a Marine being outside the Oval Office isn’t the only sign of the president being inside.

Important: A Marine is usually, but *not always* outside the West Wing when the president is in the Oval. https://t.co/hb3ABsytHg

Often nighttime, weekends and public holidays. The 100% indicator is whether a USSS agent is posted in the colonnade

Regardless of whether or not Trump was inside the Oval Office as his tweet suggested, the president has been active on Twitter on Monday morning, repeatedly railing against Democrats amid the current partial government shutdown.

I just looked into the Oval Office myself, and @POTUS was in fact sitting behind the Resolute Desk working. So, now I’m just waiting for you and the rest of your ilk to either stop jumping to false conclusions, correct the record, or, here’s a thought, call the press team to ask. https://t.co/uzIp0i7Dwo