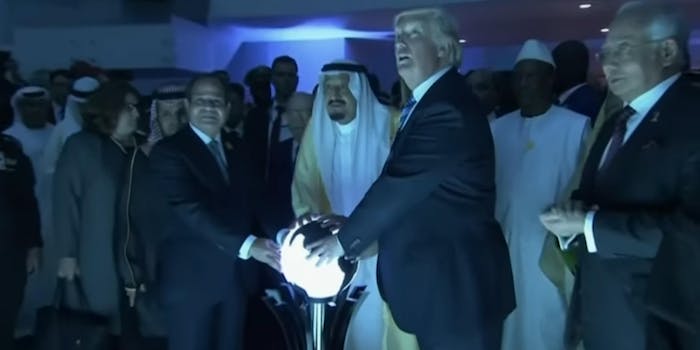 The U.S. is now in possession of Saudi Arabia’s mysterious orb

The orb was the center of a memetic frenzy in 2017.

President Donald Trump traveled to Saudi Arabia in 2017 and touched a glowing orb, a photo that took the internet by storm.

Now, the fate of that infamous orb seems to be known: the Guardian reports that the orb made its way to the U.S. embassy in Riyadh, Saudi Arabia after Trump left the country.

The Guardian obtained a copy of a forthcoming book by New York Times correspondent Ben Hubbard about Mohammed bin Salman. In it, he notes that the orb was given to the U.S. embassy after being unveiled at the Global Center for Combating Extremist Ideology. The orb served as a ceremonial prop amid the opening of the center.

However, it doesn’t seem like the orb has had an illustrious life at the embassy.

“It sat in a hallway for a number of days, where diplomats passing by would pose for photos,” Hubbard writes in the book, according to the Guardian.

Then: “someone apparently worried that the photos would make their way online and cause a scandal, so the orb was hidden away in embassy storage.”

It feels like a deflating end for an orb that became a meme frenzy.

You can read all of the Guardian report here.