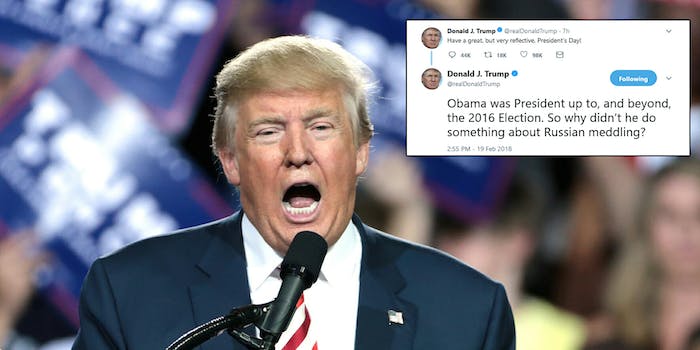 Despite the president’s false assertion that he never said Russia “did not meddle in the election,” a recent indictment by Special Counsel Robert Mueller detailed the extreme actions Russian actors took to sow discord–and push favor toward Trump–ahead of the 2016 election.

Trump has called Russia’s meddling a “hoax” and “fake news,” but over the weekend he backpedaled those sentiments, claiming he was only talking about possible collusion between the Trump campaign and Russia.

The president began Monday by telling people to have a “great, but very reflective” Presidents Day, but then followed up that tweet by blasting Obama by linking a new tweet in a thread. The president has also questioned Obama’s response in the past.

“Obama was President up to, and beyond, the 2016 Election. So why didn’t he do something about Russian meddling?” Trump wrote.

While there has been criticism of Obama’s response to Russia’s election interference, former Vice President Joe Biden said last month that Senate Majority Leader Mitch McConnell refused to sign a bipartisan statement condemning the country’s election meddling during the 2016 election.

Without bipartisan support, the Obama administration was hesitant to make any public acknowledgment.

“Can you imagine if the president called a press conference in October, with this fella, Bannon, and company, and said, ‘Tell you what: Russians are trying to interfere in our elections and we have to do something about it,’” Biden said, according to Politico. “What do you think would have happened? Would things have gotten better, or would it further look like we were trying to delegitimize the electoral process, because of our opponent?”