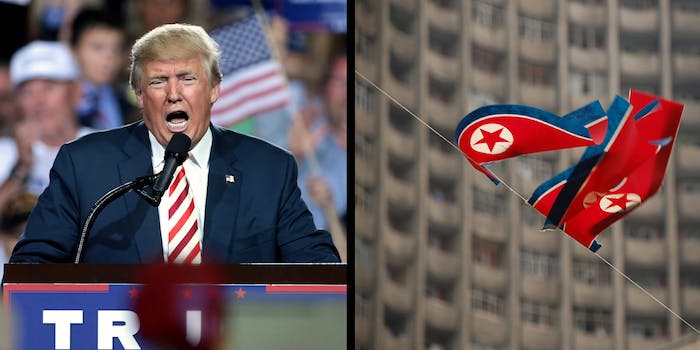 After North Korea missile launch, Trump warns ‘all options are on the table’

The statement is the latest in a war of words between the U.S. and North Korea.

President Donald Trump continued his use of harsh language to chastise North Korea after the country’s latest missile launch.

North Korea launched a ballistic missile over Japan into the Pacific Ocean on Tuesday morning, which traveled nearly 1,700 miles.

The White House issued a statement from Trump following the latest missile launch, ending with a grave warning that echoed several other statements the president has directed at the reclusive country in the past few weeks, as tensions continue to rise between the two nations.

“The world has received North Korea’s latest message loud and clear: this regime has signaled its contempt for its neighbors, for all members of the United Nations, and for minimum standards of acceptable international behavior,” Trump said in a statement. “Threatening and destabilizing actions only increase the North Korean regime’s isolation in the region and among all nations of the world. All options are on the table.”

POTUS on North Korea: "All options are on the table." pic.twitter.com/uh7ZNfa91I

In response to the North’s latest launch, South Korea reportedly bombed a shooting range near its border with North Korea country as part of a military drill.

In response, North Korea threatened to send missiles at Guam, a small island territory of significance to the U.S. military, prompting the island’s government to issue a warning to residents on what to do if a missile strike occurred.

The North backed off that threat, prompting Trump to congratulate Kim Jong-un, the ruler of North Korea, for making a “very wise and well reasoned decision.” Last week, Trump said he felt as if the North now had “respect” for the United States following the ratcheting up of words.