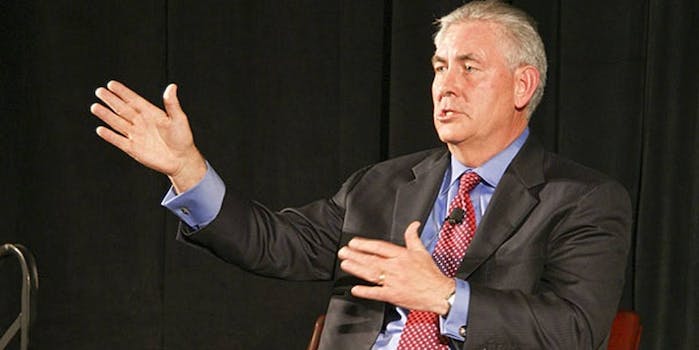 The corporation did business with Iran, Sudan, and Syria.

USA Today reported on Monday that Tillerson served as president of Exxon Mobil when the company did business with Iran, Syria, and Sudan. Even though the three countries were under U.S. sanctions as state sponsors of terrorism, Exxon Mobile was able to conduct the sale through a European subsidiary.

Exxon Mobil told USA Today that the business dealings weren’t illegal since they were conducted by Infineum—a European subsidiary—and did not involve U.S. employees.

Tillerson’s career heading one of the world’s largest multinational oil and gas corporations has meant extensive business dealings with the heads of oil-rich countries, including Russia’s Vladimir Putin. Senate Democrats have warned that Tillerson’s array of corporate interests will mean a tough road to Senate confirmation, though his nomination appears imminent.

Tillerson will face the Senate Foreign Relations Committee for the first time on Wednesday. He has completed his ethics paperwork and his public financial disclosure report, according to the Office of Government Ethics.

Tillerson, who formally resigned from Exxon Mobil on Dec. 31, has signed an ethics agreement that will bar him from participating in any specific matter in which Exxon Mobil is a party for a period of one year.

Tillerson was given the Order of Friendship by Putin in 2013, one of the highest honors the nation gives to foreign citizens. Russia gave Exxon Mobil access to drilling in the Russian Artic in 2011, in exchange for allowing the Rosneft—a Russian state-owned oil company—the ability to invest in Exxon Mobil’s overseas operations, reported the Guardian.

But the profitable Rosneft-Exxon Mobil partnership was torn apart by U.S. sanctions on Russia due to its attacks on Crimea in 2014. The total loss to Exxon Mobil was $1 billion.

Tillerson has called for a removal of U.S. sanctions on Russia that have targeted the Russian oil industry, and argued that they hurt U.S. oil companies.