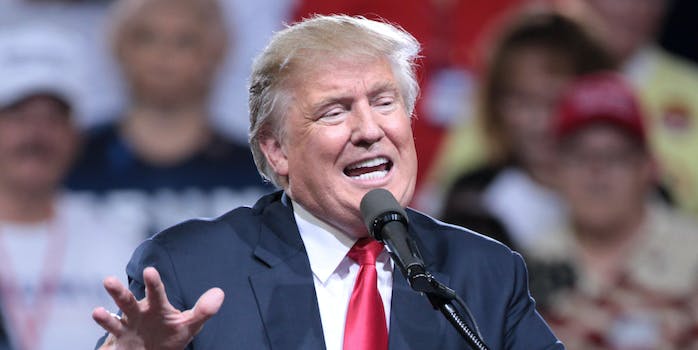 4 years ago today, Trump made fun of Clinton for catching pneumonia

Donald Trump’s tenure as president has given rise to a new internet adage: “There’s a tweet for everything.” This axiom is deployed when Trump says or does something that directly contradicts his old tweets, such as when he criticized former President Barack Obama for playing golf, bragged about paying a ton of taxes, or spread disinformation about autism and vaccines.

When there isn’t a tweet, often there’s video footage.

Early Friday, news broke that both the president and First Lady Melania Trump had tested positive for COVID-19. The news that the couple has been infected with the novel coronavirus sent the internet into a frenzy of memes, conspiracy theories, and arguments.

Within hours, a clip resurfaced of Trump mocking Hillary Clinton falling down during the 2016 presidential campaign.

Carl Quintanilla of NBC was first to unearth the footage from a rally that took place four years ago to the day.

In it, Trump pantomimes Clinton falling at a 9/11 commemorative event weeks prior. She was later diagnosed with pneumonia.

“But here’s a woman, she’s supposed to fight all of these different things, and she can’t make it 15 feet to her car,” Trump scoffed, to the crowd’s delight. “Give me a break.”

The clip did not age well.

“Small men make fun of others, big men lift others up,” said one.

Some Twitter users viewed the resurfaced clip as tacit permission to make fun of Trump’s diagnosis, a subject that has been the source of significant debate online. The president has repeatedly downplayed the virus that has claimed the lives of more than 200,000 Americans and counting. Many believe he has mismanaged the pandemic.

“Seems like he gives is permission that is it is fair game to mock someone who is sick….hmmm….let the games begin,” one tweeted.

Both Trumps are quarantining at the White House and are reportedly experiencing mild coronavirus symptoms.