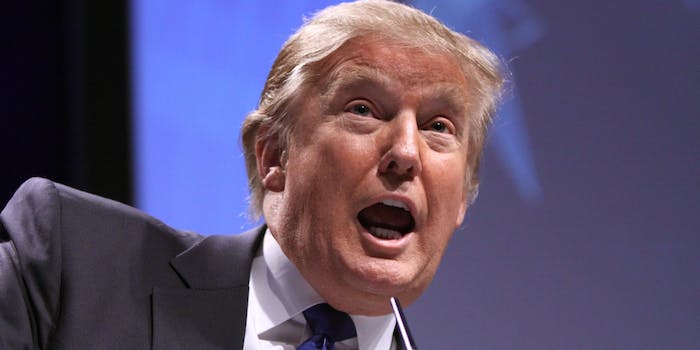 President Donald Trump‘s mainstream media accountability survey seems to have gotten off on the left foot, according to an email pushed to his PAC list on Friday.

According to several reports and accounts on Twitter, a second email regarding Trump’s survey—an incredibly biased questionnaire that asks negatively leading questions regarding the media and that was supposedly launched in the name of media accountability—urges supporters to take the survey themselves, despite the fact that the survey was pushed less than a day prior.

Why the quick follow up? Democrats and the mainstream media, the email alleges, have attacked the survey and attempted to sabotage the results.

Yes, that’s correct. The president believes, once again, that another poll is rigged. This time, it’s a poll he’s created himself.

“The President emailed you to take the urgent Mainstream Media Accountability Survey. Since then, mainstream media outlets have viciously attacked it … and thousands of Democrats have taken it to try to sabotage the results. Which is why we need your IMMEDIATE help as one of President Trump’s biggest supporters,” the email reads.

In a new email, team Trump complains that Democrats are trying to “sabotage the results” of his Mainstream Media Accountability Survey pic.twitter.com/FBFCXiaA86

Trump’s tweet on Friday, sent hours after the follow-up email, seemed to echo this resentful sentiment toward the media, with Trump bashing the New York Times, NBC, ABC, CBS, and CNN, calling the outlets “the enemy of the American people.”

The survey itself is obviously directed toward Trump’s supporters and the Republican party in general, with several of the questions referencing “our Party” and “our message.”

Two of the questions do mention the Democratic party—one asks if the media pits Republicans against each other to elect the other party’s members, while another insists that Republicans did not obstruct Barack Obama while mentioning that Democrats are obstructing Trump.

Such actions call into question Trump’s sincerity when he claimed he wanted to be the president for “all Americans.”