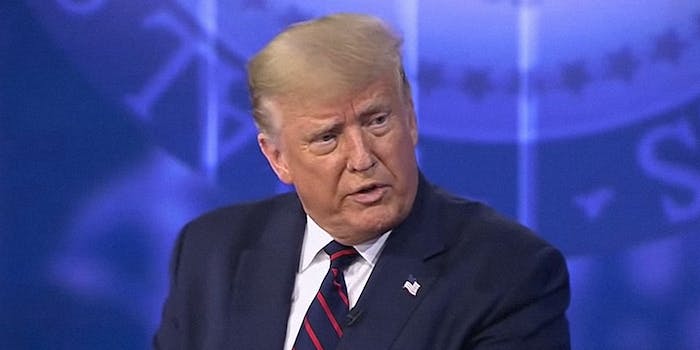 The president claimed that Democrats never upheld a national mask mandate because they “checked out.”

During an ABC 2020 event on Tuesday night, a Pennsylvania voter asked President Donald Trump: “Why don’t you support a mandate for national mask-wearing? And why don’t you wear a mask more often?” His response, which blamed Joe Biden for not implementing a national mask mandate, caused viewers to agonize over the future of America’s political climate. Democratic candidate Joe Biden, who is not president, doesn’t have the power to call for a national mandate.

Aside from the irrational statement, Twitter users took issue with the president’s claims about mask-wearing as an insufficient safety measure. “The concept of a mask is good but it also does… you’re constantly touching it, you’re touching your face, you’re touching plates. There are people who don’t think masks are good,” he said.

Both the CDC and authoritative public health figures have recommended wearing face masks as a means to slow the spread of the coronavirus. Meanwhile, President Trump has continually spoken about and displayed his disapproval for mask-wearing—a harmful message for a country’s leader to send to its citizens during a deadly pandemic. The internet displayed its own disbelief with the statement being made so close to Election Day.

“The only explanation I have here is that he does not understand what a mandate is,” wrote @rabiasquared.

Even Biden himself responded. “To be clear: I am not currently president,” he wrote.

Later in the event, the president rejected claims that he downplayed the coronavirus’ severity. “I didn’t downplay it. I actually in many ways up-played it, in terms of action,” he responded to an audience member. Last week, audio of Trump in conversation with journalist Bob Woodward from February emerged online, revealing that he downplayed COVID-19’s severity. “I wanted to always play it down. I still like playing it down,” he said on tape.