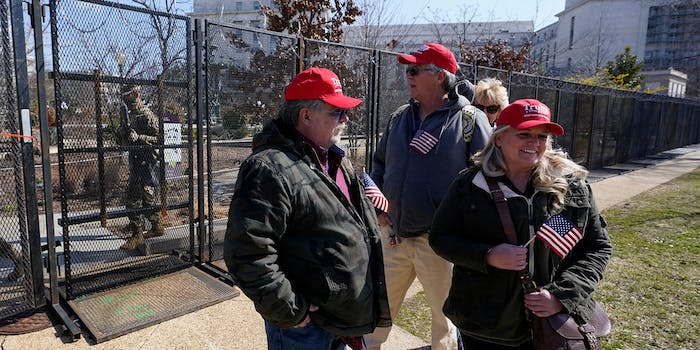 Who could have guessed it wouldn't happen?

Yesterday, according to adherents of the QAnon conspiracy theory, former President Donald Trump was supposed to be rightfully re-inaugurated as president, thanks to an obscure loophole in the Constitution.

It did not happen.

And though there was some halfhearted believe in the QAnon movement that something might happen, according to reporters on the ground, the scene in D.C was uninspired.

Which makes sense. After the Jan. 6 Capitol riot uprising, QAnon supporters were deplatformed from major sites, making it more difficult to organize. Some are still even jailed from their actions. And it seems unlikely after dozens of their brethren were arrested, they would rally on the ground for an event that had a small chance of going down and a high chance of them being cuffed.

That still didn’t stop the internet from gleefully roasting the sparse scene of true diehards who showed up.

It even got compared to the long-ago drama over the size of the crowd at Trump’s first inauguration.

There hasn’t been much of a new date bandied about for the movement. And with QAnon completely silent, March 4 might be remembered as the moment it all petered out.