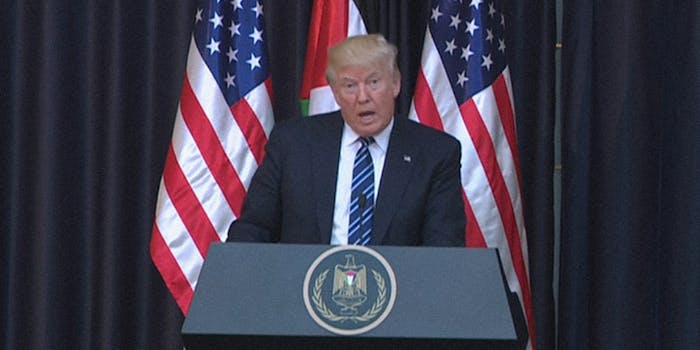 Trump and U.K. Prime Minster Theresa May agreed the attack was 'particularly wanton and depraved.'

President Donald Trump offered words of sympathy to the victims of an attack at an Ariana Grande concert in Manchester, England, and called those who carried out the bombing “evil losers” during remarks in Israel early Tuesday.

The president offered his “deepest condolences” to the victims of the attack, which left at least 22 people dead and 59 people injured when a man detonated an improvised explosive device near the entrance of the Manchester Arena on Monday night. Authorities have arrested another suspect in connection with the attack.

“I extend my deepest condolences to those so terribly injured in this terrorist attack and to the many killed and the families—so many families—of the victims,” Trump said. “We stand in absolute solidarity with the people of the United Kingdom.”

“So many young, beautiful people living and enjoying their lives, murdered by evil losers in life,” Trump continued. “I won’t call them ‘monsters’ because they would like that term. They would think that’s a great name. I will call them, from now on, losers, because that’s what they are. They’re losers. And we’ll have more of them, but they’re losers—just remember that.”

Trump also tweeted early this morning, echoing the sentiment he shared during his remarks in Israel.

We stand in absolute solidarity with the people of the United Kingdom. pic.twitter.com/X6fUUxxYXE

Trump also spoke to British Prime Minster Theresa May. During the call, the two leaders agreed the attack was “particularly wanton and depraved,” according to the White House press office.

“The president reassured the prime minister that Americans stand with the people of the United Kingdom and that our resolve will never waiver in the face of terrorism,” the press office said in a release. “[Trump] offered American aid in the United Kingdom’s investigation and vowed to continue the mutual fight against terrorism.”

During his speech in Israel, Trump also said that society can have “no tolerance” for attacks such as the one in Manchester.

“We cannot stand a moment longer for the slaughter of innocent people,” Trump said, later adding, “this wicked ideology must be obliterated, and I mean completely obliterated.”

Several other world leaders expressed their condolences for the attack as well:

Canadians are shocked by the news of the horrific attack in Manchester tonight. Please keep the victims & their families in your thoughts.

Pained by the attack in Manchester. We strongly condemn it. Our thoughts are with the families of the deceased & prayers with the injured.