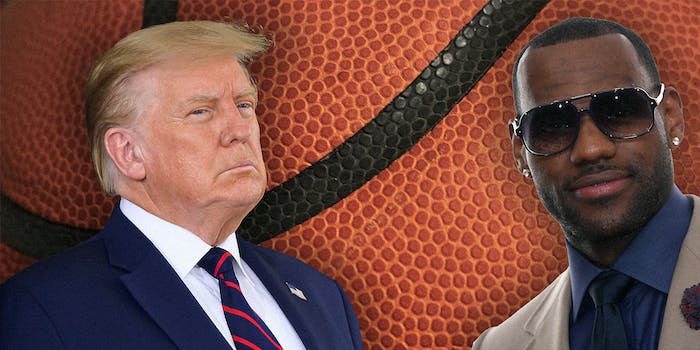 'His RACIST rants are divisive, nasty, insulting, and demeaning.'

Former President Donald Trump accused NBA star LeBron James of racism on Thursday after the athlete weighed in on the police killing of Ma’Khia Bryant, a 16-year-old Black girl.

In a now-deleted post from Wednesday, James tweeted “you’re next,” a hourglass emoji, and #accountability alongside a photograph of the police officer who shot and killed Bryant in Columbus, Ohio. The officer shot Bryant just before former Minneapolis police officer Derek Chauvin was found guilty on three charges stemming from the death of George Floyd.

Bryant had reportedly called police after a fight broke out in front of her home. When the responding officer arrived, identified as Nicholas Reardon, Bryant was seen fighting two other girls with a knife in her hand. Bodycam footage shows the officer fired four shots at Bryant, who died as a result, after witnessing the fight for around six seconds.

Critics argue that the officer should have attempted to de-escalate the situation instead of using deadly force.

While the tweet, which had a hashtag that said “accountability” and seemed to imply being held accountable for the shooting, James’ tweet was quickly pounced on by conservative lawmakers who accused the athlete of inciting violence against the officer.

“Lebron James is inciting violence against an Ohio police officer,” said Sen. Tom Cotton (R-Ark.). “This is disgraceful and dangerous. Is the NBA okay with this? Is Twitter?”

Soon enough, Trump also joined in and released an official statement about the tweet. In the statement, the former president—who routinely was called out for making racist remarks—called James “racist.”

“LeBron James should focus on basketball rather than presiding over the destruction of the NBA, which has just recorded the lowest television RATINGS, by far, in the long and distinguished history of the League,” Trump said. “His RACIST rants are divisive, nasty, insulting, and demeaning. He may be a great basketball player, but he is doing nothing to bring our Country together!”

In a follow-up tweet on Wednesday, James, who has long been a vocal supporter of the Black Lives Matter movement, stated that he deleted the tweet because it was “being used to create more hate.”

“I’m so damn tired of seeing Black people killed by police. I took the tweet down because its being used to create more hate -This isn’t about one officer,” James wrote. “It’s about the entire system and they always use our words to create more racism. I am so desperate for more ACCOUNTABILITY.”