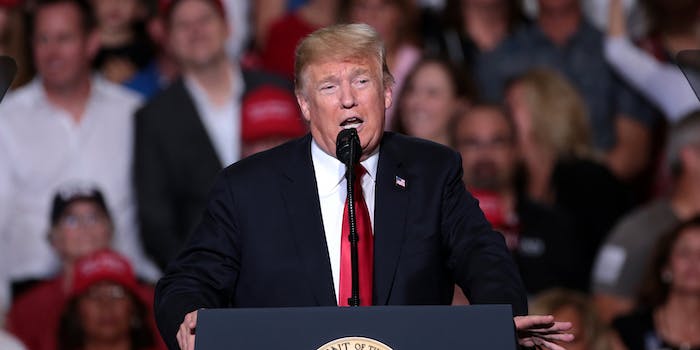 The president said the U.S. may 'never know all of the facts.'

President Donald Trump signaled on Tuesday that the U.S. would continue its support of Saudi Arabia, despite the killing of journalist Jamal Khashoggi.

In an exclamation point-filled statement, the president said that the U.S. may “never know all of the facts surrounding the murder of Mr. Jamal Khashoggi” and called Saudi Arabia “a great ally in our very important fight against Iran.”

“I understand there are members of Congress who, for political or other reasons, would like to go in a different direction—and they are free to do so. I will consider whatever ideas are presented to me, but only if they are consistent with the absolute security and safety of America,” Trump said in a statement. “After the United States, Saudi Arabia is the largest oil producing nation in the world. They have worked closely with us and have been very responsive to my requests to keeping oil prices at reasonable levels–so important for the world.”

The president backed Saudi Prince Mohammed bin Salman and said the U.S. has sanctioned Saudis “known to have been involved in the murder” of Khashoggi.

“King Salman and Crown Prince Mohammad bin Salman vigorously deny any knowledge of the planning or execution of the murder of Mr. Khashoggi,” Trump said in the statement. “Our intelligence agencies continue to assess all information, but it could very well be that the Crown Prince had knowledge of this tragic event–maybe he did and maybe he didn’t!”

The statement from the president did not sit well with some members of Congress.

Sen. Dianne Feinstein (D-Calif.) blasted the statement, saying that “Human rights is more than just a phrase, it has to mean something,” according to MSNBC.

Sen. Feinstein on President Trump's support for Saudi Arabia, despite the murder of Jamal Khashoggi: “Human rights is more than just a phrase, it has to mean something. And that means standing up and condemning a brazen murder by a foreign government."

Last week, the Washington Post reported that the CIA concluded bin Salman ordered for Khashoggi to be killed.