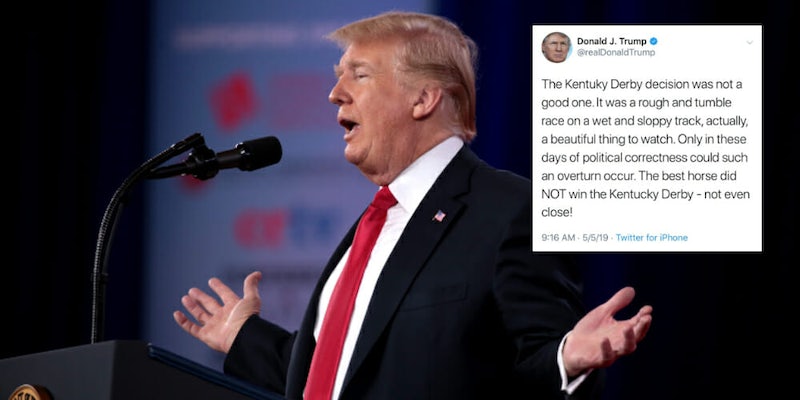 President Donald Trump weighed in on the Kentucky Derby fiasco via Twitter—and he misspelled Kentucky in the process.

On Saturday, the Kentucky Derby ended in controversy. For the first time in Kentucky Derby history, the first place racehorse, Maximum Security, was disqualified for leaving its lane and cutting off another horse in the process. The winning title was then given to the second place horse, Country House.

The president called the decision to strip Maximum Security of his title one of “political correctness” in a tweet Sunday morning.

“The Kentucky Derby decision was not a good one. It was a rough & tumble race on a wet and sloppy track, actually, a beautiful thing to watch. Only in these days of political correctness could such an overturn occur. The best horse did NOT win the Kentucky Derby – not even close!” Trump wrote.

The Kentucky Derby decision was not a good one. It was a rough & tumble race on a wet and sloppy track, actually, a beautiful thing to watch. Only in these days of political correctness could such an overturn occur. The best horse did NOT win the Kentucky Derby – not even close!

That was actually Trump’s second tweet regarding the Kentucky Derby controversy. His initial tweet offered the same sentiment but was later deleted due to a glaring typo. He originally wrote “Kentuky” instead of Kentucky–leading the former to trend on Twitter.

Many were quick to remind the president that nothing can ever be truly erased from the internet.

i have no idea what happened at the kentucky derby but this is an incredible tweet pic.twitter.com/hAvtofxd3t

All you had to do was read off the bucket in front of you. #Kentuky pic.twitter.com/bBFr5okw8r

How in the F is it that we have a President of these great and wonderful United States that can’t spell the name of 1 of them? #Kentuky!? I had to fight my phone to get it wrong.

Good morning to the people in the great state of Kentuky!

You missed the "c" in Kentucky. It should be easy to remember…c for collusion, corruption, conviction…

If you are just waking up and wondering why Kentuky is trending, here is why…

Donald Trump is an uneducated imbecile.

Trumpism in a nutshell: Kentucky voted overwhelmingly for Trump and he can’t even spell the state right.

Today we learned that the president of the United States doesn’t know how to spell the word kentucky.

1. Yesterday, Trump retweeted a series of bigots, conspiracy theorists and white nationalists and then said he supports a totalitarian dictator who murders people for sport & threatens to nuke the US.

The main headlines today are about the Kentucky Derby and Biden. That’s crazy.

Trump has had a busy weekend on Twitter. His Kentucky Derby tweet definitely pales in comparison with his other more serious weekend Twitter activities. On Saturday he retweeted a major QAnon account spreading Islamophobia, as well as a string of accounts defending the far-right media personalities banned from Facebook.