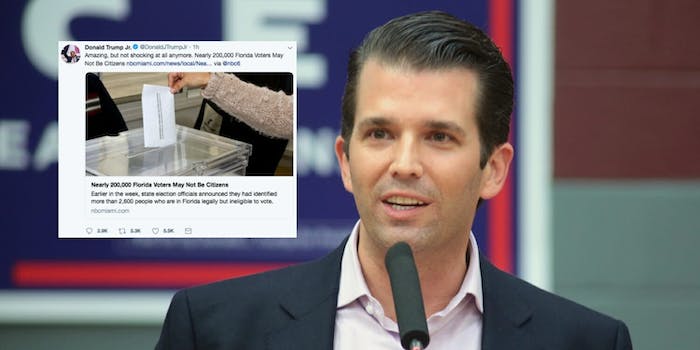 Editors have since corrected the article.

Donald Trump Jr. and several other high-profile conservatives came under fire on Monday after digging up and circulating a debunked 2012 NBC article in support of their claim of widespread voter fraud in the  2018 midterms.

The rhetorical campaign was launched formally by President Donald Trump in a tweetstorm on Friday when he alleged foul play in the tight Senate race in Florida.

In a bid to establish the president’s baseless accusations, conservatives dug up a since debunked six-year-old article which reports that Florida state officials found “nearly 200,000 registered voters” that may not have been U.S. citizens.

David Wohl, father of right-wing provocateur Jacob Wohl, appears to have first pushed the piece in a tweet that blasts Florida as a “Banana Republic.”

Florida has become a Banana Republic right in our own back yard. https://t.co/6KeUeBx2bE via @nbc6

In a fever of excited confirmatory bias, major conservative pundits and pro-Trump media personalities began to share the article. Charlie Kirk, who also pushed it, has since deleted his tweet.

The article eventually made it all the way to the top, tweeted out by the president’s son.

Amazing, but not shocking at all anymore. Nearly 200,000 Florida Voters May Not Be Citizens https://t.co/8HiObPLeeM via @nbc6

Unfortunately for those on the right, an NBC editorial correction published at the top of the article since its resurgence on Monday makes clear that, far from 200,000 fraudulent votes in Florida, “only 85 noncitizens were ultimately removed from the rolls out of a total of about 12 million voters at that time.”

Those who were already ridiculing the narrative took great joy in pointing this out.

It says right at the top of the story that it's from 2012. You didn't even read it, did you? pic.twitter.com/orDvi73E7n

Yes. Amazing that you're sharing old articles that have since been thoroughly revised. But not shocking that you didn't read. Like father like son.

Oh for fuck's sake learn to read. Published in May 2012. And ultimately discovered only 85 on the rolls…not voted.

For those already convinced that there is a grand liberal conspiracy to disenfranchise Republicans, however, the facts are unlikely to make a difference.