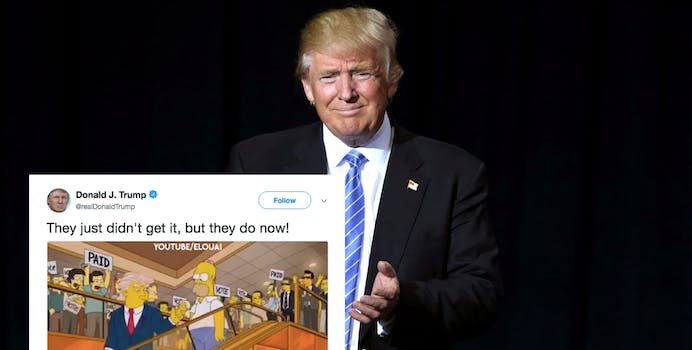 The libs have been owned.

How are you feeling about voting for president on Nov. 8, 2016? Relatively ambivalent given that it happened almost two years ago?

Well, fret not, if you need to get fired up to travel back in time and join in the nationalist fervor that swept Donald Trump to the presidency, you … can’t do that, as far as anyone knows, given time’s linear nature.

But if it were possible, the president has released just the hype video for you to watch, so you can get pumped up while you are making the journey across the space-time continuum and into the voting booth.

They just didn't get it, but they do now! pic.twitter.com/9T50NupkDy

The two-minute video features notables from the liberal wing of politics stating with complete confidence that Trump would never be president. It ends with a montage of the hosts of the Young Turks, a liberal online news show, freaking out on election night as states start breaking for Trump.

We won’t tell you how it ends, because you know, if you find out he won, perhaps you’ll be less inclined to travel back in time and vote for him.

Anyway, according to leading conservative tweeters, the posting of the video, a highlight reel of a 2-year-old story we all know intimately well, owned the libs.

This is pretty awesome. https://t.co/evE5GNq9Mc

This is basically an Owning the Libs highlight tape holy shithttps://t.co/S8qLwJxLEh

With the libs finally, fantastically owned, trolled nearly to death, the president can now set his eyes on the next major pressing matter of his presidency: Doing another version of this same tweet two weeks later.