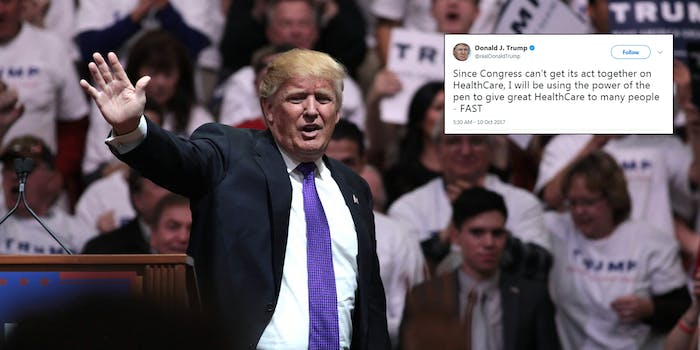 Will Trump use an executive order to address Obamacare?

President Donald Trump said on Tuesday morning that he would take reforming the United States’ healthcare laws into his own hands if Congress does not act.

In a tweet, Trump said he would use the “power of the pen”–presumably referring to an executive order–to reform healthcare.

“Since Congress can’t get its act together on HealthCare, I will be using the power of the pen to give great HealthCare to many people – FAST,” Trump wrote.

Since Congress can't get its act together on HealthCare, I will be using the power of the pen to give great HealthCare to many people – FAST

It wasn’t immediately clear how, or what, exactly Trump would sign.

However, last month Trump said he would sign a “very major” executive order that would allow people to go across state lines to purchase healthcare.

Congress has been unable to repeal, or repeal and replace, the Affordable Care Act–a major campaign promise among Republicans, who control both houses of Congress.

The Senate tried several times to pass a version of a bill that would repeal former President Barack Obama’s signature domestic policy but failed numerous times to secure the required number of votes. The lack of action has frustrated Trump, according to his Twitter feed.

In a wide-ranging interview with Forbes published on Tuesday, Trump called the Affordable Care Act a “total mess” and said he is trying to “keep it afloat.”