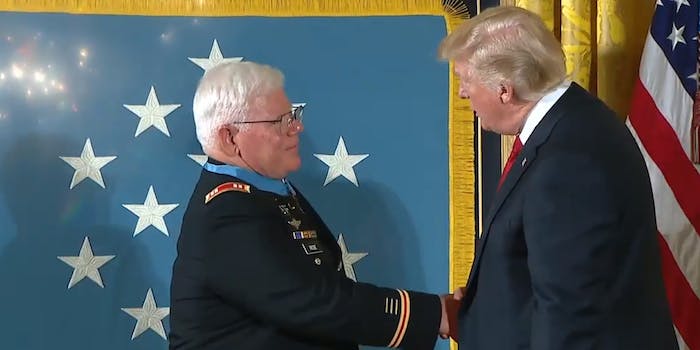 Trump's done this a lot in the past.

Not even Congressional Medal of Honor recipient Capt. Gary Rose was safe from feeling the wrath of President Donald Trump’s notorious vice-grip of a handshake.

Shortly after giving Rose the medal during a ceremony in the East Room of the White House, Trump leaned in and grabbed his hand and pulled in hard—just as the president has done with world leaders like French President Emmanuel Macron and Canadian Prime Minister Justin Trudeau.

In some ways, it shouldn’t be shocking that Trump went in for his signature masculinity-testing hand grab, considering he’s done it so many times in the past.

He used the stunt against 2012 presidential candidate and former Massachusetts Gov. Mitt Romney and Japanese Prime Minister Shinzo Abe in February, which garnered some laughs. His handshake met its match against Macron in May when the French president came in quick and bested Trump—but then, only a few months later, they engaged in an awkwardly long rematch.

Given that Trump began his day discrediting a Gold Star widow’s account of a phone call he had with her about her husband that was killed in Niger, an (overly) strong handshake is probably the best case scenario that could have happened at Trump’s Medal of Honor event on Monday afternoon.