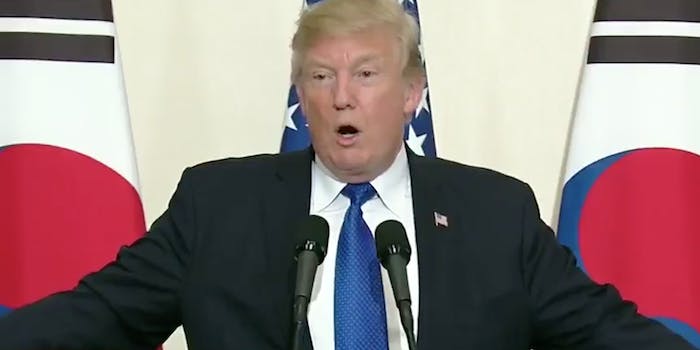 Trump rejected the idea of 'extreme vetting' for gun buyers.

NBC News’ Ali Vitali asked Trump at a press conference in South Korea on Tuesday whether he would consider “extreme vetting” for gun buyers following a mass shooting at a church in Sutherland Springs, Texas, on Sunday that left 26 people dead and at least 20 more injured.

Trump first mildly scolded the reporter, saying she brought up “a situation that probably shouldn’t be discussed too much right now” because “we could let a little time go by” and they were currently “in the heart of South Korea.” (Emphasis his.) Trump then said greater background checks would have made “no difference” in Texas. He cited the fact that a bystander, Stephen Willeford, shot at the gunman, Devin Patrick Kelley, before he chased him down in a fellow bystander’s truck, which ended in Kelley crashing into a ditch.

Trump on civilian who intervened in Texas shooting: “If he didn’t have a gun, instead of having 26 dead, you would have had hundreds more.” pic.twitter.com/K67H8HpF9J

“If you did what you’re suggesting, there would have been no difference three days ago,” Trump said. “And you might not have had that very brave person who happened to have a gun, or a rifle, in his truck go out and shoot him and hit him and neutralize him. I can only say this, if he didn’t have a gun, instead of having 26 dead, you would have had hundreds more dead. So that’s the way I feel about it—not going to help.”

Trump then pivoted to Chicago when asked again, calling the city with “the strongest gun laws” a “total disaster.”

Police recovered a Ruger AR-15-style rifle at First Baptist Church in Sutherland Springs, as well as two handguns in Kelley’s car. Kelley was found dead in his vehicle from a self-inflicted gunshot wound.

Kelley did, in fact, pass an FBI background check to purchase the firearms used in Sunday’s massacre. However, it appears the system failed.

A former airman, Kelley was discharged from the United States Navy in 2014  after being convicted by a general court-martial for two counts of domestic violence. The incidents—which, legal documents reportedly say, included kicking and choking his wife, threatening her with firearms, and brutally punching his young stepson—would have likely disqualified him from purchasing firearms. However, the special investigations office at Holloman Air Force base, where Kelley served, did not record the domestic violence convictions in the national background check database.