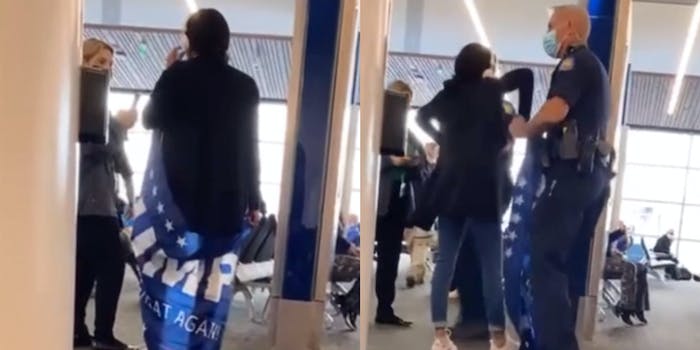 'Do you have permission to record me?'

Viral footage of an altercation at the airport between an apparent supporter of former President Donald Trump and someone filming them is blowing up online, as people revel in the video’s instant karma.

One version of the clip, posted to Reddit’s r/PublicFreakout subreddit, has received more than 17,000 upvotes in less than 24 hours on the platform. Viewers are flooding the comment section with jokes and questions about the flag-toting woman’s immediate comeuppance.

The footage shows a woman toting a large Trump flag around the Phoenix Sky Harbor International Airport. The viral footage, which clocks in at less than 30 seconds, begins as the woman asks another person, who is initially obscured, if they are recording her. Midway through her questioning, the woman shifts to reveal a small blonde woman with her phone out.

Asking if she has “permission to record,” the Trump flag-flying woman removes her headphones from one ear, her body language gradually shifting to become more aggressive.

The blonde’s responses to the flag-toting woman’s increasingly irate questions are unintelligible, but her stance never shifts. After asking several more times if she has “permission to record me,” the flag-shrouded woman loses her temper, and slaps the phone out of the other woman’s hands. It thuds to the ground a few feet away, to gasps and expressions of shock from the surrounding travelers.

The flag-toting woman almost instantly regrets this decision, as two police officers enter the screen from behind. As the woman shouts, yet again, “do you have permission to record me?” one of the officers notes that “you don’t have permission to smack people’s phones.”

The woman, briefly attempting to resist the officers, informs the male cop that “I don’t care, she don’t have permission to record me.”

Even as she speaks, the officers gently grab the woman’s wrists and pull them behind her. As they begin leading her away, the woman announces that “its okay, I already have a lawsuit.” She repeats this claim in a singsong voice in the video’s final moments, as the officers escort her offscreen.

Commenters were quick to drag the woman for seeking “attention by demonstrating in a public place” only to become “upset when she receives attention.”

Viewers labeled the woman a “troll trying to collect civil suits” and flooded the comment section with educational points about recording in public. “For the last time: NO ONE NEEDS PERMISSION TO RECORD YOU IN PUBLIC,” one person wrote.

Quite a few people fixated on the Trump aspect of it all. They noted that disruptions like these always seem to stem from Trump supporters, and noted that “Parading around with a political flag at an airport is just objectively weird.”

People vocally wondered what the woman was trying to accomplish, more than a year after Trump’s presidential defeat—despite his false claims otherwise—by waving a flag around an airport. They noted that airports have immensely high security, and people are typically distracted by the stress of travel, which makes them a uniquely bad choice for a year-late political demonstration.

Regardless, the woman likely faces a lawsuit of her own for damaging the other woman’s property.